This post was written by Maurice Oniang'o and appeared on Africa.com.

Protein is an essential nutrient necessary to maintain and repair the human body. For children, they require plenty of high-quality proteins to facilitate normal growth and development. However, for many in Kenya today, accessing protein-rich food is an expensive affair due to soaring food prices and scarcity. This adversely affects the wellbeing of many Kenyans, especially children, who might suffer from malnutrition due to lack of proteins. Studies indicate that one out of every four children under five years of age is stunted (too short for their age). Four out of every 100 children under five are wasted (too thin for their height). These numbers translate to millions of children in the country.

A team of researchers from the Egerton University are working on promoting insects as food and feed as a source of protein in the country. Led by Drs. John Nduko and Anthony Kingori, the team is rearing grasshoppers and locusts to provide cheaper and easily accessible proteins while at the same time help combat malnutrition. The team started by collecting wild locusts from Nakuru and Baringo Counties and tried rearing them.

According to the project's principal investigator, Dr. John Nduko, Department of Dairy and Food Science Technology at the university, the rising cost of conventional animal protein, food and feed insecurity, environmental pressures, population growth, and increasing demand for protein among the middle classes have made insects such as locusts and grasshoppers emerge as sustainable alternative solutions to human food and livestock feed.

The team started in October 2015, and they have been achieving positive results with the research. “The conventional sources of proteins such as chicken, beef and fish are not only expensive but also inaccessible to many households in Kenya today,” said Dr. Nduko. After collecting their first batch, the team kept the bugs in small metal cages out in the field. They then tried to breed them in different temperatures so as to get the best conditions to rear them. This was also to establish the best incubator conditions for reproduction and hatching. “We have now identified three species that multiply very fast and they also mature within four to six weeks,” he added.

From the locusts and grasshoppers, the researchers are developing baby food and animal feed for fish and chicken. They intend to make their baby food cheaper than what is in the Kenyan market today. To process the baby food, they harvest, freeze, and dry mature locusts and grasshoppers, after which they remove the outer cover and mix with finger millet and mill the mixture. “Because starch is not easily digestible to young children, we take it through a process called malting to make it digestible for young children,” said Dr. Nduko. The team is now in the process of analysing the feed and it will be ready for the market soon.

The research was made possible through a startup grant from the Global Center for Food Systems Innovation (GCFSI) of Michigan State University, through which they partnered to develop a toolkit that would make insect rearing and processing available to smallholder farmers. Even as cheaper and accessible source of proteins become available to children, some mothers seem uncertain and others have mixed feelings about the food. A cross-section of mothers interviewed in Nairobi expressed various views about feeding their children food that has been made out of locust and grasshoppers.

Josephine Ndung’u, a mother of one, she needs a lot of convincing before she can think of giving the food to her son. She said that the thought of a baby food coming from an insect scares her. However, she is quick to add that once the food has been tried and tested, she can feed it to her son. “I can look past my phobia if the food has been approved not only by pediatricians, but also mothers who have used it,” she said.

Esther Njonde would not want to be among the first mothers to use it. She said that after the food has been approved and tested, she can then introduce it little by little to her four-month-old son. “I have no problem giving it to my son if it is rich in proteins; however, it has to be certified by experts. And also once I hear from fellow mothers who have used it,” she said.

However, for Brenda Lito, a mother of one, she said that she cannot give her son food made from insects. She said that she has never eaten any insects and would not want to give her son what she, herself, has never tried. “I think it might be fun for him to eat an insect like termites for fun and not as a meal, but for locusts, I doubt he can accept,” she said.

It seems the mothers will need more convincing, and the researchers are optimistic that they will manage to do just that. According to Dr. Nduko, they have arranged a series of stakeholder meetings and with women groups to enlighten them about the baby food and other products from the insects.

They are hoping that parents will look at the benefits rather that the myths about feeding on insect products. “One of the key benefits is that the food has a high content of proteins and fatty acids that are essential for babies,” said Dr. Nduko. Environmentally, rearing the grasshoppers and locusts is a plus as they produce less greenhouse gases, take less space and are primary consumers. 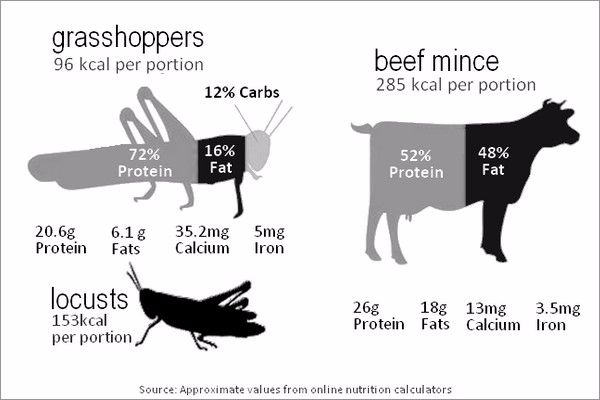 The researchers are also doing sensitization exercises to bring on board other stakeholders, such as small and medium enterprises, to invest in the rearing of the locusts and grasshoppers. They will also teach the women groups on how they can do breeding and hatching of eggs. “After we are done with piloting, we intend to upscale and expand to other regions of the continent so as to provide cheaper and accessible sources of proteins, which will, in turn, help alleviate malnutrition in the continent,” said Dr. Nduko.

Read about how the latest research from the Fish Innovation Lab is helping increase the livelihoods of individuals like Matunda Said.

A Look Back on the Livestock, Animal Source Foods and Household Nutrition Learning Series

As our year-long, TOPS-funded Livestock, Animal Source Foods (ASF) and Household Nutrition Learning Series comes to an end, we have been reflecting on the series and lessons learned.

Meat, Milk, Eggs Make a Big Nutritional Difference in the First 1,000 Days of Life in Low-Income Countries, With Lifelong Benefits

Global efforts to limit or reduce consumption of meat, milk, and eggs over environmental concerns should exclude pregnant and breastfeeding women and babies under two, especially in low-income settings where...