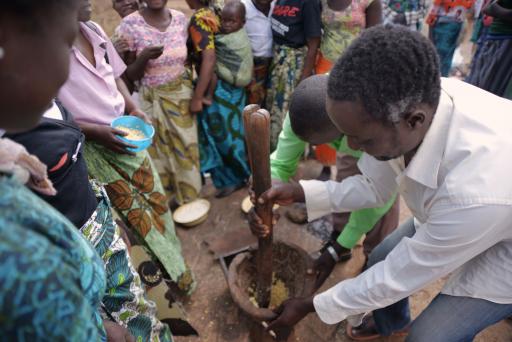 Gender relations, including roles, responsibilities, ownership of assets and ability to influence decision-making, have a strong impact on whether or not a food systems innovation is adopted and to what extent it benefits the target population.

Without a gendered activity profile, a tool that provides information regarding who — men or women — is responsible for which activities, innovators risk designing a technology that is not suited to the specific needs of end users. “What may be appropriate for men may not necessarily be appropriate for women and vice versa. So it’s important to first know who is responsible for each activity and what their specific needs are,” said Dr. Nathalie Me-Nsope, Gender Lead at Michigan State University’s (MSU) Global Center for Food Systems Innovation (GCFSI), a global development lab established through the Higher Education Solutions Network of USAID. “Generally in the design of food systems innovations or technologies,” said Me-Nsope, “designers talk about smallholder farmers as the end users. And, smallholder farmers are usually referred to or treated as a homogenous group — one that is identical in preferences, needs and scale of operations. But within that category of smallholder farmers you have disparities in terms of needs and preferences, and gender is one of the factors that explains these disparities.”

Working directly with the center’s innovation grantees, Me-Nsope helped build their capacity to conduct a gender analysis during the early stages of project design and implementation. She then followed up with them to discuss the effectiveness of gender integration efforts. “Gender analysis is a very important step. It improves the processes and outcomes of food systems innovation,” she said. “It adds value to research and increases the likelihood that food systems innovations will be adopted and/or achieve their overall goals of reducing poverty and promoting nutrition, food security and sustainability.”

Me-Nsope notes that gender integration is often viewed on a continuum, which includes three classes or degrees of integration: gender exploitative, gender accommodating and gender transforming. In gender exploitative innovations, she said, innovators intentionally manipulate gender inequalities to their advantage. In gender accommodating projects, researchers may develop strategies to work within the established gender norms. These projects often acknowledge disparities but lack activities intended to advance relations toward equality. In gender transforming projects, however, innovators actively engage with methods to close the gap on gender disparities.

While it is best practice to conduct the analysis before jumping into a project, some innovators may not have the ability to do so. “Rather than bypass it entirely, doing the analysis midway can prevent unintended consequences that may otherwise happen,” said Me-Nsope. “Then, once the gender analysis is completed, the findings should be incorporated throughout the innovation cycle — from design to implementation to the monitoring and evaluation stage.” In her report, Me-Nsope summarizes how various GCFSI-funded research teams approached the gender analysis. Some teams conducted the analysis before design, while others conducted it as a way to solve an unforeseen challenge.

Focused on harnessing the power of anaerobic digestion, innovators Rebecca Larson, of the University of Wisconsin-Madison, and Vianney Tumwesige, CEO of the Ugandan energy company Green Heat, created a dual-fuel stove that runs on biogas and electricity. With plans to install it at a primary school near Kampala, the innovators talked with a number of officials from the school. “The people who came to the meetings were all men, so the innovators were not talking to the actual users of the technology,” said Me-Nsope. “Women are the ones who would use the stove for cooking and be responsible for operating the biogas system, but they weren’t attending the meetings and couldn’t give their input.”

In this case, researchers missed the opportunity to conduct a gender analysis early on, which resulted in difficulties midway through the project. Attune to what was going on, Larson and Tumwesige identified that they needed to speak directly with women — who were the actual end users — and returned to interview them. Innovators then modified the design of the stove and system to meet the women’s needs.

Another component of the biogas project included the installation of a digester unit that yields nutrient-rich fertilizer. While the fertilizer was a new and valuable product for system users, the early iteration of the technology led to unintended consequences. The initial unit required frequent input of water, which resulted in an added labor burden for young boys who, according to the gender division of labor, are traditionally responsible for water collection. To avoid turning a solution into a new problem, innovators designed an add-on to the digester — a solid-liquid separation unit that recycles water back into the system. This solution eliminated the need for frequent water collection and input into the system and minimized the labor burden.

“While gender analyses often discover issues facing women, a well-done analysis accounts for constraints, disadvantages and inequalities facing both genders,” said Me-Nsope. “In this situation, it was young boys who were inadvertently disadvantaged.”

MSU researchers Adam Lyman and Ronald Averill set out to develop a human-powered bean thresher that would improve beans processing for women in Zambian communities. “They wanted to give women an opportunity to earn more money from their beans. They didn’t want to disappropriate women from the activity,” said Me-Nsope. The innovators conducted a gender analysis before and during an evaluation of the first draft of the technology, which generated information about who is involved in what activities in beans production and processing, and what their specific needs and preferences are. “The results indicated that men preferred a motor/diesel-powered bean thresher, a technology with a high energy demand, but women were less excited about such a machine. The consequence of building a diesel-powered thresher would have been the exclusion of women, who would have a harder time using such a technology,” noted Me-Nsope.

In this project, conducting the gender analysis ahead of design and implementation enhanced the innovators’ human-centered design approach. Without a gender analysis, human-centered design risks looking at end users in a homogenous way, but with a comprehensive analysis, specific needs and preferences of the end-user groups are revealed and design can be adjusted accordingly.

Another team of GCFSI-funded researchers worked with beekeepers in Kenya to identify opportunities to improve honey production. In the process of conducting a gender analysis, Maryann Frazier of Pennsylvania State University and Benjamin Muli of South Eastern Kenya University learned that beekeeping has historically been restricted to men only — a disparity that stems from two underlying assumptions. First, it is commonly believed that hives must be placed high in the trees in order to yield significant honey production, and it is considered inappropriate for women to climb trees. Second, beehives are often located deep in the forests, and the harvesting of bees takes place at night. Cultural norms make it inappropriate for women to be too far away from their homes and out at night. However, data collected through Muli and Frazier’s project indicates that the height of the hive does not have a significant impact on bee productivity. “Their data undermines a long-standing assumption about women and heights and nights, and, as a result, the findings from their research lifts a long-existing barrier to access that women faced,” said Me-Nsope. “It improves gender equitable access to beekeeping as an income-generating activity. It has the potential to transform gender relations if women have control over income.”

While an in-depth impact evaluation is needed to determine the long-term impact of an innovation on a community’s gender relations, it is clear that conducting a gender analysis provides researchers with a deeper understanding of the circumstances that impact the adoption and success of what appears to be an effective solution to a food systems challenge. According to Me-Nsope, that can make all the difference. “If we don’t pay attention to gender issues,” she said, “we might end up with a wicked problem, in which an innovation solves one problem but creates a new one.”

For more about gender integration and best practices for conducting a gender analysis, view Me-Nsope's report, Gender Practice in Food Systems Innovations: Approaches, Lessons and Challenges, on GCFSI's website. Reach out on Twitter to @me_nsope and @GCFSI.

How a Business Accelerator in Bangladesh Influenced Gender Roles and Relations