"Wash, wash, wash!" shouts a woman enthusiastically to encourage her husband who is washing clothes in an open-air game during a commune festival in Quang Binh province. In Vietnam, women carry out the bulk of unpaid care and domestic work, nearly four times more than men. The disproportionate amount of time women spend on household chores, alongside other gender disparities, limit women’s opportunities to equally participate in economic activities. In October 2017, SNV’s Enhancing Opportunities for Women’s Enterprises (EOWE) program organized 12 commune festivals to trigger communities to rethink gender norms that form a barrier for women’s economic participation.

The commune festivals were organized by SNV and local partners in four EOWE target provinces — Quang Binh, Binh Dinh, Ninh Thuan and Binh Thuan — and attracted more than 4,300 visitors. In the months before the commune festivals were taking place, a selected number of couples from the communes participated in facilitated household dialogues. Through mapping tools, games and interactive discussions the couples were triggered to reflect on roles and relationships within their household and to make an action plan for change. The household dialogues and commune festivals are two examples of Social and Behavior Change Communication (SBCC) used within the EOWE program.

The key theme of the SBCC interventions in 2017 is sharing household chores between husband and wife, as women cannot increase their participation in the economy if men are not increasing their participation at home. The stories from couples that participated in the household dialogues show that both men and women have changed their perceptions and behaviors. "I used to think that the duty of a husband is just to make money," says Mr. Nguyen Quang Trung, a carpenter from Quang Binh province. “Since participating in the household dialogues and listening to the prejudices and barriers that every woman, even my daughter, is facing I changed my attitude and thought. Sharing the housework and taking care of and teaching the children is now not my wife’s duty, but my daily little joy.” 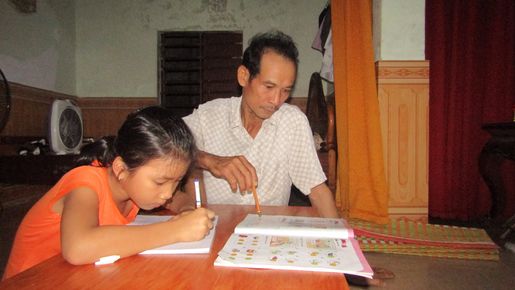 The initial results of the household dialogues show a major change in perceptions and behavior. However, as the participating couples are the minority in a community that upholds traditional norms, there is the risk that couples fall back into old behaviors. Ms. Kieu Thi Phuan, an ethnic minority woman from Ninh Thuan province, explains that men in her village consider cooking, laundry and child care as women’s duties. And that every time a man assists his wife in cooking or doing laundry, this will be discussed and discouraged by men at drinking parties. “However, this is a story of the past,” says Ms. Phuan. “Since my husband and I participated in the household dialogues, he has changed a lot. In addition to arranging his time to work and help me clean grass and harvest asparagus, my husband shares the tasks of cooking, washing dishes and taking care of the children with me. I could not dream that he would change like that.”

The organization of commune festivals is one of the approaches to upscale the gender transformation beyond the selected households to the wider community. Different forms of "edutainment" are used during the festivals to engage communities and promote civic dialogue within the communities around gender norms. In one of the shows, men from the community dress up like pregnant women while washing clothes. “These forms of edutainment form an entry point to address sensitive issues like gender equality in communities,” explains Resy Vermeltfoort, Knowledge Management and Communications Advisor at SNV. “Communities actively participate and engage in these shows. There is a lot of laughter and fun while getting the message across. After the festival, people go home and digest what they have seen and heard and begin to think about the changes they would like to see, while having the couples who participated in the household dialogues as role models around them.” 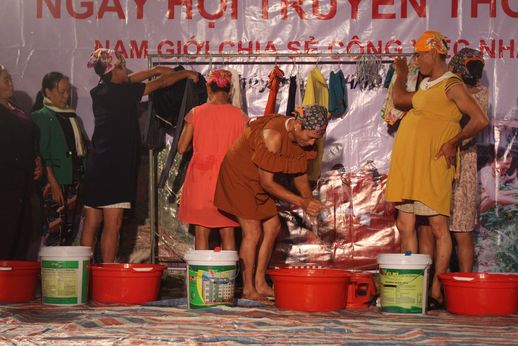 In two communes, the couples who participated in the household dialogue also followed a photo-voice training in which they learned how to tell their story of change through photos. The best photo and story behind the photo of each couple was displayed at the commune festival. Mr. Do Ba Toan, a 60-year-old man from Quang Binh province, visited the commune festival with his family. “We have a lot of social activities in our commune, but this is the first time that I attended a photo exhibition,” says Mr. Do. “The pictures and stories are beautiful and natural and reflect love, care and happiness between husband and wife. The meaningful message that women and men should share work in the house and in the field really inspires me.” 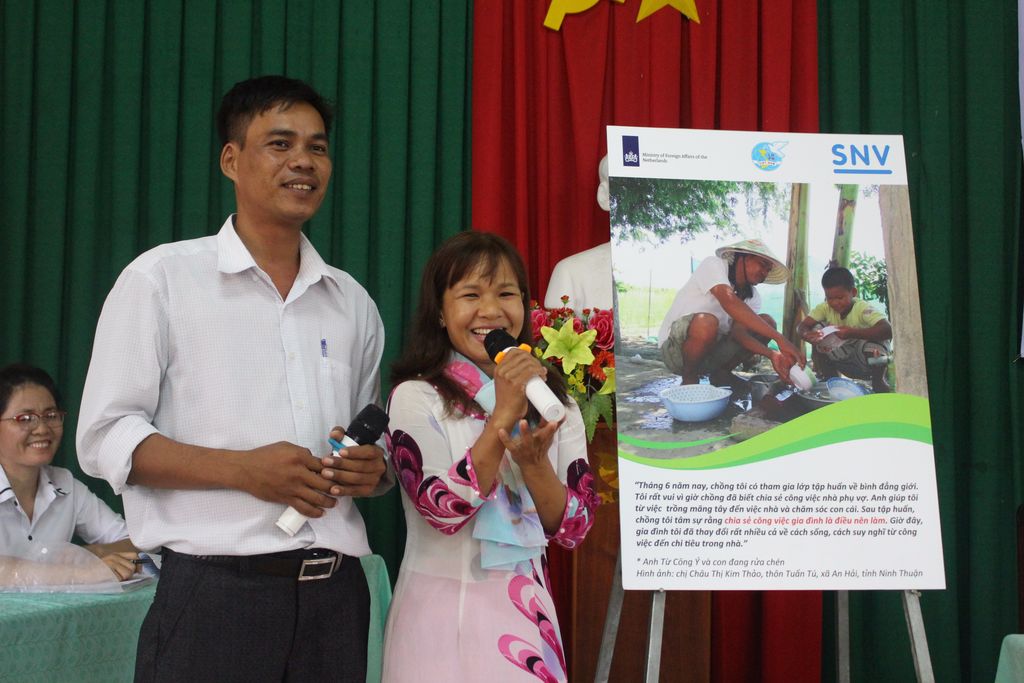 Photo:  A couple sharing their story of change during cooperative meeting in Ninh Thuan.

The EOWE program uses an integrated approach to reduce barriers and increase opportunities for women-led businesses in agriculture. Next to the transformation of gender norms in households and communities, the EOWE program provides business support to women farmers, entrepreneurs and agricultural cooperatives and focuses on improving the enabling environment by advocating for the development and implementation of gender-sensitive policies.

In August 2018, SNV and the Provincial Women’s Union organized the Women Business Start-up 2018 event in Binh Thuan, Vietnam, where 16 women had the opportunity to present innovative start-up...

Learn how household dialogues are helping illustrate how changing gender norms could enhance the success of businesses in Kenya.

In Vietnam, gender issues have received increasing attention in the agricultural domain. The Ministry of Agriculture and Rural Development (MARD) has a Gender Equality Action Plan for 2016-2020 expressing its...