Onions Bring a Smell of Prosperity to Upper Egypt

Shaaban Mohamed Ghelab used to grow wheat, sugar cane, hibiscus and a few other crops on his family farm near the town of Esna, 340 miles south of Cairo. After each harvest, he sold the produce in the local market, paying up to 20 percent of the sale price to local middlemen. Price fluctuations made Shaaban reluctant to invest much in his farming for fear he couldn’t recover the costs. As a result, production remained well below its potential.

When the USAID-funded Feed the Future Egypt Food Security and Agribusiness Support project got underway in 2016, things began to look up for Shaaban and his family.

With guidance from Cultivating New Frontiers in Agriculture (CNFA), the organization implementing the project, staff identified and contacted Al Nanaia Company, a large onion processor in northern Egypt. Shaaban and other members of the farmers’ association he belongs to negotiated forward contracts with the company. Al Nanaia committed to purchasing all the onions the association could produce at a guaranteed price.

Upper Egypt has an agricultural tradition stretching back 5,000 years. Farmers here know what they are doing. But Shaaban had until then only grown small numbers of onions for home consumption. He needed some advice on larger scale onion cultivation. Project agronomists stepped in to show association members the best time to plant, how much and what type of fertilizer and pesticides to use, how often to irrigate, and other useful techniques. 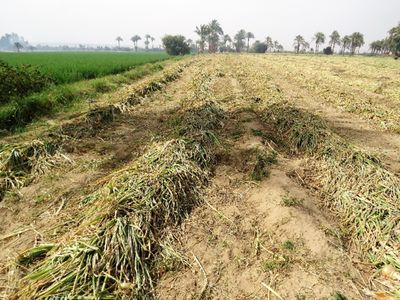 Shaaban’s open-mindedness and willingness to learn were quickly recognized by project staff. He was chosen as one of the project’s “lead farmers,” his land serving as a demonstration farm for neighbors to see what the project is doing and hopefully encourage new members to join the association. There is strength in numbers.

In October, Shaaban planted an onion nursery on less than one-fifth of an acre. After 60 days, the young plants were pulled up and replanted on three acres to give them room to thrive. Five months later, the mature onions were dug up and laid out to dry for a week, then transported to a nearby collection center, one of several supported by the Feed the Future Egypt Food Security and Agribusiness Support project. Al Nanaia company trucks picked them up there for shipment to the factory, located 40 miles north of Cairo.

After loading the first year’s crop, the project arranged for Shaaban and other farmers to ride in the trucks with their onions to the factory, where they watched them being sliced, further dried, processed into onion powder and packaged for export.

“That visit made a big impression,” Shaaban says. “I saw how our onions are processed and how important it is for the company to receive quality onions from us. They can’t accept just any onions.”

Now Shaaban’s recruitment efforts for the association focus not on just any farmers, but on “good farmers,” those who will make the extra effort for quality. “A bad farmer who mixes poor quality onions with the others will hurt us all,” Shaaban observes. “The company won’t want to buy from any of us anymore.” 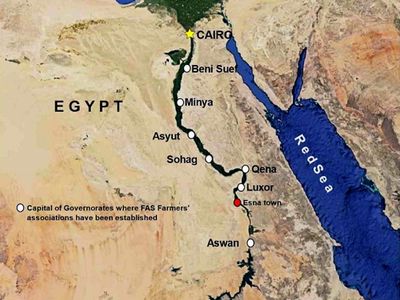 Growing onions requires more time and investment than many other crops. Labor, for example, has become very expensive in Egypt. To counter this, some members of the farmers associations hire young women in surrounding villages to help with the weeding, hoeing, transplanting and harvesting. This offers the women a source of income that would be difficult for them to find otherwise.

Despite the higher costs of production, the profits from onions are better than from the previous crops. Shaaban spent the equivalent of about US $500 to grow his onion crop last season. He sold 15 tons to Al Nanaia Company for a total of $2,128. Shaaban found a local buyer willing to pay a bit more for another five tons of onions, bringing in an additional $860. And 250 kg were left over for Shaaban’s family to enjoy.

That comes to a net profit of $2,500 after expenses, not bad compared to the $650 a typical small farmer can expect to make annually in Upper Egypt. And Shaaban can grow a second, different crop in the summer on the same land.

Shaaban and other members of the Esna farmers’ association make up just one community among many that has benefited from the technical training, business advice and marketing offered by the Feed the Future Egypt Food Security and Agribusiness Support project. Project-supported farmers in other areas of Egypt, from Aswan in the south to Bani Suef in the north, are finding that their improved ability to grow high-quality produce offers them much more clout with buyers, allowing them to grow more and sell at higher prices. The confidence of farmers and purchasers continues to strengthen with each successful harvest.

You can learn more about the Feed the Future Egypt Food Security and Agribusiness Support project on cnfa.org.

Learn more about interactive workshops providing a space for young engineers and researchers to discuss the specific relationships between gender and agricultural technology innovation that are relevant to the Eastern...

Cultivating the Next Crop of Agricultural Entrepreneurs

The annual macadamia harvest is now underway in Kenya, and The Village Nut Company’s hilltop factory in Nyeri County is buzzing with activity.