his blog post was written by Rajendra Uprety, a senior agriculture development officer in the Department of Agriculture in Nepalq. With years of experience working in the Nepalese District Agriculture Development Office, Rajendra has worked extensively in agricultural extension—with a focus on systems of rice intensification—throughout Nepal and abroad.

We need sustainable, healthy and productive agricultural systems to feed our continuously growing population. The agricultural system in Nepal is rapidly changing and has become unpredictable as a result of a few factors: the changing natural and socio-economic environment, changing consumer preferences and a globalizing marketing system. Demand for high-quality food is increasing, but the production environment—especially soil quality (structure, property and fertility)—is deteriorating in many developing countries. This is making farmers more vulnerable and less competitive, and compromises local food security. Socio-economically, cereal-based farming systems have become less attractive, particularly for young people, because of the shrinking profit margin from low-productivity cereal farming (MOAD 2012).

To attract younger generations to agriculture, we need to improve the current situation. Central to achieving our objectives is improving the quality of our soil, which is the foundation for productive and sustainable agriculture. I want to share our experience in Nepal, including how farmers have changed their farming techniques to farm more productively, more profitably and more sustainably by using organic manure combined with chemical fertilizers and by developing other local innovations.

Morang is Nepal’s largest rice-growing district, situated in its southeast corner, where more than 90,000ha is used for rice cultivation. In Morang, farmers grow rice in three seasons; the rainy season (June-November) is the main growing season, followed by the winter (December-June) and spring (March-July) seasons. During winter and spring, rice is grown in the areas where an irrigation facility is assured. But one-third of these areas are rain-fed and, therefore, more vulnerable. Cropping intensity in Morang varies. In some areas, only one crop per year (rainy season rice) is possible, but in areas with better irrigation systems farmers can grow three to four crops per year.

In general, farming areas that are more diversified is also more productive and sustainable. A major reason for this is better soil management by those more intensified farmers, for whom farming is a means to gain more income for their livelihoods. This demonstrates that socio-economic factors are indeed deeply embedded in agro-ecological strategies and that it is crucial to address them comprehensively for productive and sustainable farming. Without improved agro-ecological techniques, productive farming is not possible; without better yield and profit, farmers may not be attracted to improved agro-ecological management practices.

The State of Rice Production in Nepal

Average growth rates of rice yields were also decreasing in other countries—it was a common phenomenon in rice-growing countries (Dawe and Dobermann, 1999). The decrease was more notable in areas where farmers used modern, high-yielding irrigated rice production technology (Cassman and Dobermann, 2001) with intensive application of chemical fertilizers. Resource degradation and declining/stagnating input use efficiency were reported as causal factors (Cassman and Pingali, 1995; Cassman et al., 1997; FAO, 1997). Inefficient use of nitrogen fertilizers on irrigated rice (Dobermann, 2000) and negative balances of potassium (Dobermann et al., 1998) were reported as the important reasons for rice yield growth decline in intensive irrigated rice farming.

Rice yield can be increased by improving the efficient use of nutrients (Wang et al., 2001; Barison, 2003) through better management practices. Some studies (Dawa et al. 2000; Gami et al. 2001; Bhandari et al. 2002) reported on the importance of using both chemical fertilizers and compost for a positive effect on rice yield and long-term sustainability. Such combination improves soil structure and maintains fertility status. Several other studies on the role of organic matter in rice cultivation found positive effects on the growth, development and yield (Eneji et al. 2001; Yang et al. 2004). Others (Bhattacharyya et al., 2003) have reported better nitrogen recovery and higher grain yield through the combined use of compost and fertilizers, as well as compost-enhanced microbial biomass (Nayak et al., 2009), significant accumulation of organic matter in soil (Sahrawat, 2004) and significant improved soil fertility (Shindo et al., 2006). All of these findings show the positive results of integrated soil nutrient management practices, which are lacking in many Asian and African countries. Where farmers are using more and more chemical fertilizers without organic manure and compost, levels of soil organic matter are decreasing, soil is becoming more acidic, phosphorus and potash levels are continuously depleted, and soil becomes less and less productive and more vulnerable due to reduced water absorption and drainage capacity.

Nutrient Management and Its Effect on Rice Yield in Nepal

Case study 1. Gobinda Dhakal is an innovative and successful farmer working in a well-managed farming system. He is a tenant farmer in Indrapur Village Development Committee (now Koshi-Harincha Municipality) of Morang district. He owns only one katha (333 m2, 0.03 ha) of land and he rents 1 ha under a fixed-rent system. (The rent is 1.8 tons rice/ha/year.) During the rainy season, he uses all of his land for rice cultivation. After harvesting, he uses that plot to cultivate different vegetables for commercial purposes, including tomato, cauliflower, cabbage, potato and broadleaf mustard. Before 2008, he used a pair of bullocks and sometimes hired power-tillers for land preparation.

When I went for a field visit to his land in 2009, he showed me his newly purchased power-tiller that his 13-year-old son operated. The tillers made land preparation easier, quicker and more cost-effective. He also earned extra income by lending out his power-tiller to other farmers. He was planning to buy half a hectare of land that he had been renting from his landlord for vegetable cultivation, the cost of which was finalized at 500,000 Nepalese rupees. Saving so much money from one hectare of (rented) land is beyond imagination for the majority of conventional farmers. But Gobinda harvested 6.6 tons of main/rainy-season rice (including 4.2 tons of Herdinath 1), 5.6 tons of spring-season rice (of his total rice yield, he gave 1.8 tons to his landlord for rent), about 4 tons of maize and wheat, and more than 20 tons of different vegetables every year. His profitable situation was possible because he used an adequate amount of manure in his rented field. His wife and three children support his farming and they have been improving their living standard year after year. His children go to school, but outside of regular schooling hours, and help in the fields during the growing season. 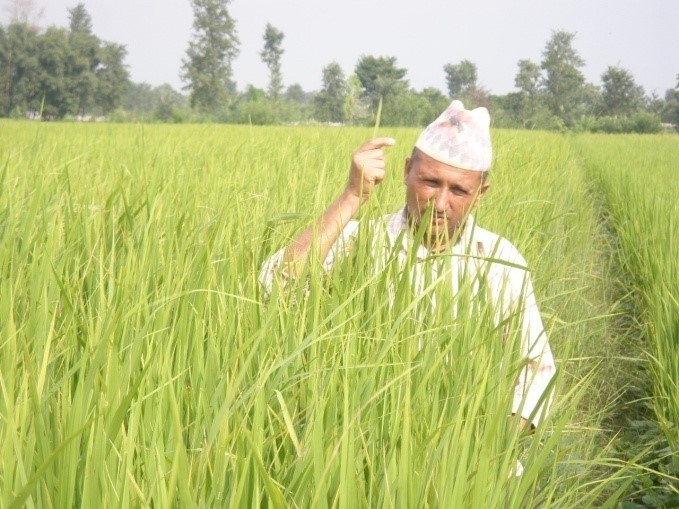 This year Gobinda’s System of Rice Intensification (SRI) fields, as well as several other farmers’ new SRI fields nearby, became a place of interest for hundreds of visitors, including farmers, policymakers, researchers and journalists. Gobinda and the other farmers, cultivating their rice using the SRI method with combined use of organic manure and chemical fertilizers, produce 6-8 tons/ha. But Gobinda, an especially innovative farmer, tried a new method of laying manure in his SRI fields.

Like several other farmers in his locality, Gobinda a biogas plant supplies his household energy. Generally, farmers do no manage their biogas slurry well and a lot goes unused. Sometimes it becomes a problem for surrounding areas because of its liquid state and bulkiness for transportation in the fields. But Gobinda made a pit connected to the biogas discharge point to collect slurry. When it filled halfway, he diluted the slurry with water then sent that mixture into his newly planted SRI rice field through an irrigation canal. He repeated the same process after 30 days. He reported that this method reduced labor requirements, increased the effectiveness of manure and fertilizers, and also increased rice yield. 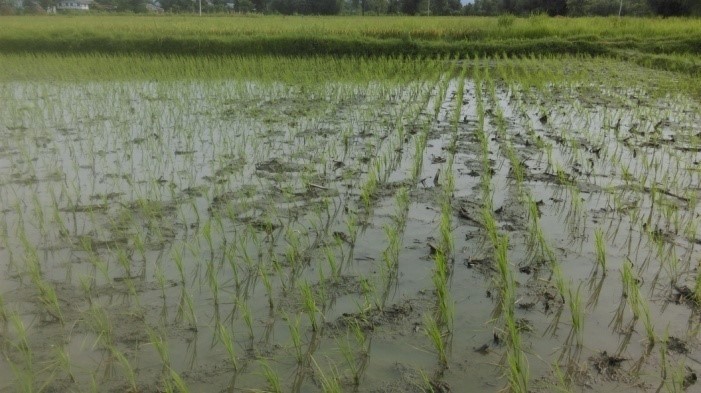 Last spring, he harvested 8.1 tons/ha of Hardinath 1, a short-duration and fine rice variety, with just half the usual volume of water and chemical fertilizers. In another plot, he cultivated Chaite 2, a coarse variety that takes 120 days to grow, using the SRI method (13-day-old seedlings, transplanted single seedling at 25 cm spacing on both sides) with similar applications of biogas slurry and chemical fertilizers, and produced 10.2 tons/ha.

Case study 2. Ramji Karki is a farmer in Indrapur village in Morang district. He started as share-cropper on less productive leased land. In 2005, after some years, he purchased the land he had been farming. However, the land was not fertile and the level of organic matter was very low. He changed his farm management practices by applying better soil nutrient management techniques—using more organic manure, incorporating cropping diversity and legumes—and this increased the cropping intensity. If a farmer owns the land, he or she gets everything produced on it; if not, all production is split 50/50 with the landowner.

That same year, his daughter Mina participated in a training on SRI, they started SRI on their land and turned things around. They started to manure their land by using more farm yard manure and organic manures rather than relying solely on chemical fertilizers, and started incorporating SRI principles into their rice farming. An alternate wetting and drying system of irrigation, instead of continuous flooding, kept soil in an aerobic state and enhanced microbial activities within it, not possible in a completely flooded condition. Within the three years of changed management practices, Ramji and Mina converted his barren plot of land into a very fertile one, and started to harvest three crops per year. In the spring of 2009, the rice yield was more than 9 tons/ha. Ramji is now one of the most productive farmers in his village.

However, instead of following the SRI method in totality, Ramji eventually adjusted his methods (through local innovation/packaging and re-shaping learned technology) to fit his personal farming situation. This is not uncommon: Most farmers who have changed their rice farming system are following neither SRI nor traditional, but rather a hybrid of methods (Uprety 2014).

There are other examples similar to Gobinda’s and Ramji’s experiences. In 2008-09, I conducted a study in Morang district, the results of which support other recent studies.

These results and findings show ways forward for future programs. The soil in these cases was in a very poor state because of continuous use of unbalanced chemical fertilizers without organic manure or compost. In the past, farmers used more nitrogenous fertilizers (urea) with minimum phosphorous and potash and no organic manure. That practice depleted phosphorus and potash levels and made soil more acidic. At the same, time it caused the soil structure to deteriorate, making it more compact and reducing its water absorption and drainage capacity. At the time, our focus was on crop yield without considering the possibility of soil degradation and nutrient depletion. Our new findings encourage farmers and extension workers to rethink our past approaches and consider the importance of good soil management. If we manage our soil properly, we can improve and restore it, and it will support us in in the long term with higher production and sustainability.