What Does Male Out-Migration Mean for Women in Tajikistan’s Agriculture? 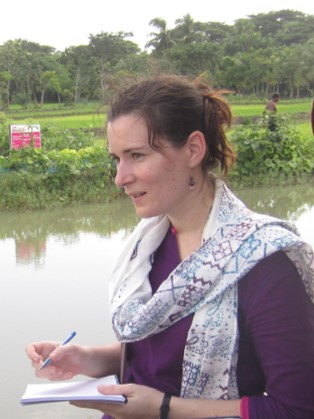 This post presents findings from the recent Feed the Future impact evaluation on the Impact of Water Users Associations (WUAs) on Water and Land Productivity, Equity and Food Security in Tajikistan.

In rural households from which men have migrated, women in Tajikistan have increased responsibilities in agriculture and are more involved in decision making. But far from being empowered, they face new pressures, including greater demands on their time and exclusion from social networks.

Male migration from rural areas is widespread in Tajikistan. A recent survey conducted in Khatlon Province shows that in 48 percent of rural households, at least one person has migrated, generally to Russia or other Central Asian countries. Consequently, remittances are a major source of incomes for rural households. As a result of economic volatility, however, the remittances are becoming more variable and may cease altogether when migrants settle permanently abroad. Household members left behind, especially women, must therefore rely on farming. While researchers have begun documenting this and other cases of the so-called “feminization of agriculture,” there is still little clarity about its impacts. Does male out-migration empower women by giving them more responsibilities and control over decisions on the farm, or on the contrary, does this weaken their socio-economic position?

Research conducted by IWMI as part of an evaluation of the impact of Water Users Associations in Tajikistan shows that male out-migration alters the roles women play in agriculture, compared with families not having migrants. When male laborers migrate, they are usually replaced with hired labor to perform mechanized activities, such as plowing and other uses of farm machinery, especially on private farms. Farm management activities, such as buying inputs or selling the harvest, also remain largely in the hands of men, though in some cases, women may assume responsibility. In contrast, women bear most of the burden for labor-intensive activities like weeding and harvesting cotton, especially when males have migrated.

The absence of men influences not only how different tasks are performed but also how decisions are made. Women in households from which men have migrated are, on average, slightly more involved in decisions about agriculture and productive resources, although such decisions are still largely dominated by males. These women also tend to have more control over income and expenditures.

While changes in women’s responsibility for decision making present a relatively balanced picture, the impacts of male out-migration on other aspects of their lives are clearly detrimental. Women in households from which males have migrated are less involved (by half, compared with other women) in agricultural or water management groups. This means they have less access to social networks that could provide them with information on agricultural technologies or with help to address challenges like accessing water, resolving conflicts and paying fees. In migrant households, 63 perccent of women have an increased workload and greater demands on their time for both productive and domestic tasks.

The changing role of women as a result of male out-migration has major implications for agricultural and water management interventions. So far, these have targeted farm managers, who are predominantly men, at least on paper, even if women actually bear the responsibility. It is, therefore, necessary to better target agricultural extension services and water management interventions, so they reach the beneficiaries, especially women, who are most in need. These forms of support are usually focused on farms. Yet, some women have no choice but to reduce cultivation on their farm land and focus their involvement in agriculture on kitchen gardens. Given the vital contribution of these gardens to food security, more attention may need to be given to improving their productivity.