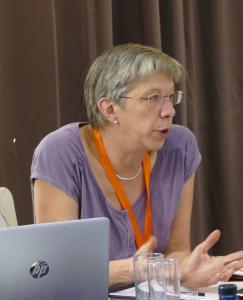 Scientists from a range of disciplines have been working in the seed system cluster of the CGIAR Research Program on Roots, Tubers and Bananas (RTB) to arrive at tools that support integrative diagnosis, design of interventions and assessment of RTB seed systems. These tools are packed into a toolbox. Seed tracing studies are one of these tools and can support the identification of entry points for the introduction of quality seeds and varieties and interventions that limit the spread of pests and diseases.

Most of the world’s farmers do not buy high-quality seed. They typically plant material they have saved themselves or that was saved by relatives and neighbors. Some may buy seed from traders, but often that seed was similarly saved by an unknown farmer. This informal system of variety maintenance and seed selection has serious implications for efforts to introduce and diffuse new varieties and clean seed. Diseases that travel with the seed can spread and contaminate soils in new areas. This is a larger threat in vegetatively-propagated crops than in seed crops.

The practices of farmers, traders and others strongly influences how seeds, pathogens, knowledge and technologies travel through the RTB network. Farmers share seeds with others, and they also sell on the market to other farmers who may thus get an easy access to new varieties. These practices form mechanisms that can work fast, may be cost effective and can be efficient in covering the last mile of the seed delivery — as compared to formal and commercial channels — although they may also turn out to be less inclusive than expected.

The seed tracing studies help in understanding how these seeds travel through the landscape. The studies are essentially based on surveying farmers who have shared seeds with each other. By asking farmers with whom they shared, and what the conditions of sharing were (e.g., volume, type of transaction or exchange), researchers can identify locations, actors and mechanisms that are particularly important for spread in the region.

Yenenesh Tadesse and colleagues from Wageningen University in the Netherlands traced the seeds of new potato varieties which were introduced by an nongovernmental organization (NGO) in Chencha, the highlands of Ethiopia. She found out how the new potato varieties reached households in the community. By studying the conditions of sharing seed, she also found that men were more often sharing with men than with women. The work suggests a gender bias in the access to seed of new potato varieties. Also, the NGO strategy to introduce seed to the wealthier farmers looked at first like there was a poverty bias. However, the data from the study indicated that better-off farmers were much better at sharing, and they also shared with the poorer farmers in the community. This finding also implies that the larger farmers are key actors when it comes to potential spreading of diseases with the seed.

A study of sweet potato in Northern Uganda, by researchers at the University of Florida and other RTB colleagues, found that sweet potato vine sellers formed a network with 27 sellers and almost 1,000 buyers, organized by their village. They used this network analysis to explore how to control an epidemic if a pathogen should appear. Quarantining villages or managing the disease intensively, so that it could not spread, would obviously help contain a disease, and the more that villages are managed, the slower the disease spread. The simplest metric to work out which villages should be managed — how many incoming links a village has — proved almost as effective as more complex criteria and much more effective than just managing villages randomly. However, management was effective only if 15 or more villages were managed.

The data from seed tracing studies can be used in impact network analysis (INA), another tool in the RTB toolbox, to study the implications for management strategies of the combination of biophysical and socioeconomic data. A recent webinar recording about INA will be available soon.

The Golden Eggs That Keep On Giving

Catalyzing a Greater Supply of Seed Potato in Kenya

Who Sits at the Table? Policy, People and Potatoes in Kenya