Tremendous Potential in a Humble Root

At an open-air market near the town of Dondo, Mozambique, Aurélio de Deus Carlos and his wife, Ana Maria Mirioni Moisès, set up their stand of baked goods first thing in the morning. On display in transparent plastic containers are small drop biscuits, a caramel-brown bundt cake and square cuts of sheet cake that offer a cross-section view of the tender crumb. Looking at the spread of baked goods, it may be a surprise to learn that their light and fluffy cakes are made from cassava, a hardy root crop with a rough exterior.

As a family business, everyone plays a part — Aurélio and Ana Maria cultivate the cassava, their son Luiz runs the mill and their daughters-in-law, Sheila and Dorca, lend a hand with baking and selling in the market.

Since 2020, the Feed the Future Resilient Agricultural Market Activities in the Beira Corridor (RAMA-BC) project has extended improved root crop varieties to over 3,500 families, including the Moisès Carlos family. Two improved cassava varieties, chinhembwe and amarelinha, were developed by the Mozambique Agrarian Research Institute (IIAM) to be resistant to cassava mosaic disease.

IIAM is an important government partner for RAMA-BC, as they work together to conduct research, promote improved agricultural practices and extend root crop varieties that are suited to local conditions and irregular climate patterns. As cassava is propagated by cuttings from the parent plant, it is particularly important to breed varieties that offer disease resistance. RAMA-BC assists in the multiplication of these varieties with Mozambican farmers and then distributes them to communities in Sofala province.

As it happens, these new varieties have proven useful for cassava cakes as well. Ana Maria, the family’s head baker, attests that amarelinha and chinhembwe tend to grow larger and yield more starch than the standard fernando boa variety commonly found in Mozambique. In cake making, the addition of starch to regular flour lends an especially moist, tender texture and a fine, even crumb. Because of these traits and their commercial success, the family is adding another .6 hectares (1.5 acres) of chinhembwe and amarelinha to their fields this year.

Processing Cassava, from Root to Cake 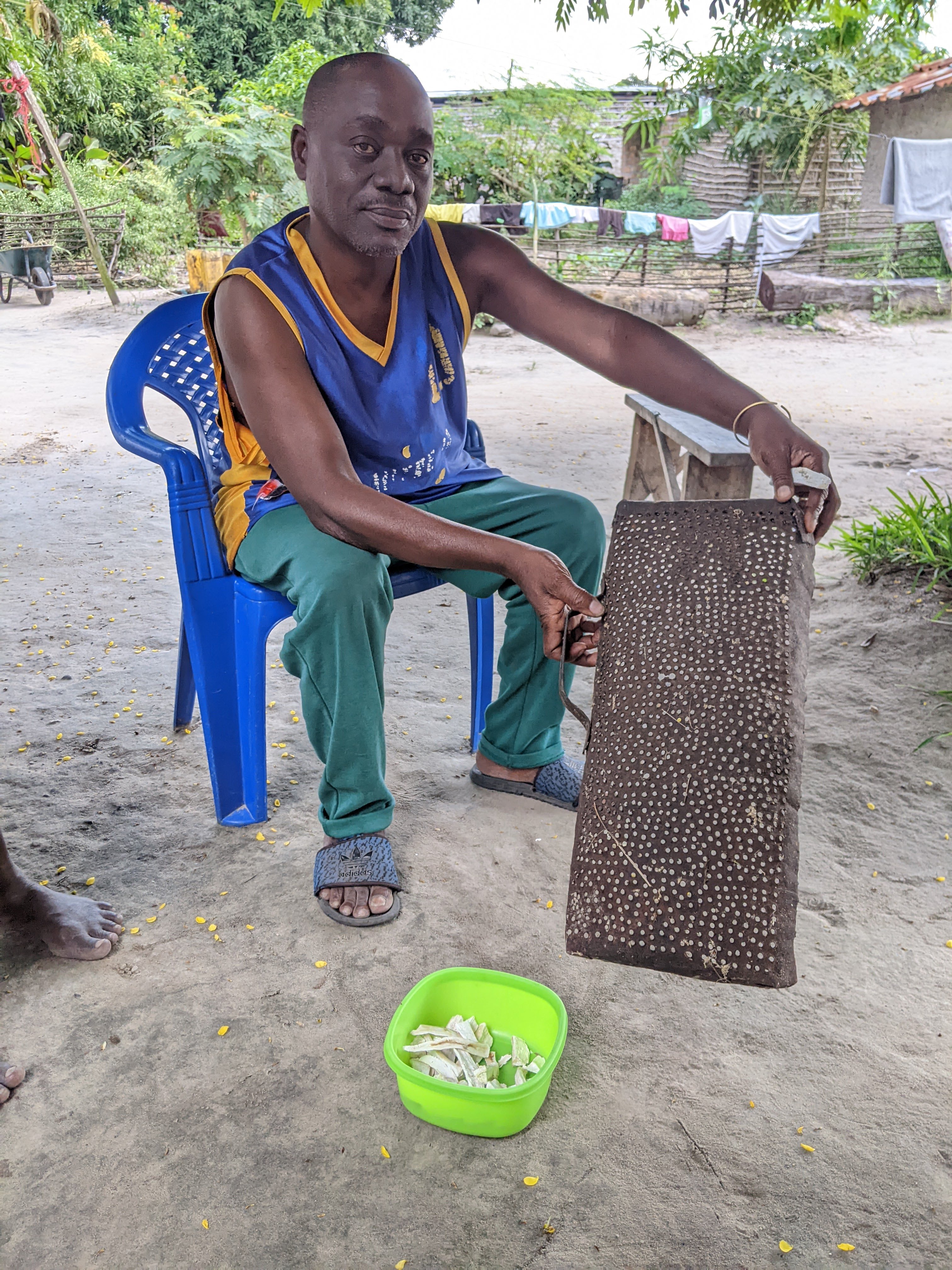 The family first started making cakes in 2015, originally using a large manual grater to shred the cassava. This method was extremely intensive, taking two to three days to grate 50 kilos of whole cassava, and being prone to cause hand injuries. Then in 2019, a government program identified them as candidates to receive a motor-powered mill. This simple, yet effective, machine reduced the labor of grinding the same amount of cassava to a mere 10 to 15 minutes.

Transforming cassava root into baked goods is a multistep process. Within three days of harvesting, the Moisès Carlos family must peel and chop the roots into small pieces. The pieces are then soaked in water overnight to allow the starch to leach out, creating cassava “milk.” The next day, the cassava is separated from the milk to be ground into a meal called ralé. The milk is then evaporated in the sun, which leaves behind a fine tapioca starch. This starch (or polvilho in Portuguese), along with the ralé, can then be used as a partial replacement for wheat flour to make the cakes. According to Ana Maria, using cassava gives the cakes a better texture and flavor.

Cassava serves an important role for food security in Mozambique, making up almost a third of calories consumed. Compared to other staple crops like maize, it is valuable for climate change resiliency in tropical regions. It is easily propagated, grows well in poor soil and resists drought. It also requires less labor and inputs, yet is more efficient at producing carbohydrates than maize, rice or wheat. Furthermore, its capacity for long-term, underground storage makes it less susceptible to cyclone damage and locust attacks, both of which have impacted food security and livelihoods in parts of Mozambique in recent years.

Cassava plants can be harvested at any point between six to 30 months, making it particularly valuable as a famine-reserve crop. Once harvested, the versatile root is used as a staple food that can be boiled and eaten alongside greens and protein for a complete meal. Alternatively, it can be milled into ralé for an energy-rich porridge. The leaves of the cassava plant are also quite nutritious, providing protein, provitamin A and vitamin C. Recognizing its importance as a staple food, efforts are being made by research institutions to develop more biofortified varieties.

At the same time, cassava should not go underappreciated as simply a subsistence or famine-reserve crop. Only 10% of cassava is currently marketed in Mozambique, despite its potential for processing into value-added products, such as cakes, breads, cookies and animal fodder. Prior to entering the cake business, the Moisès Carlos family only sold their produce directly at the local market. Now, a single large cake pan can fetch 1,600 Mozambican meticals (about US$25), which can feed their whole family for around one week. Moreover, Aurélio notes that by substituting for cassava, their business has been buffered from today’s rising price of wheat flour. As cassava can be produced, processed and traded locally, it is not subject to the price instability or global supply chain disruptions of imported flour.

For the last four years, the Moisès Carlos family has reaped the benefits of value-added processing of improved cassava varieties. So much so that they see opportunities to grow their business in the future by increasing the size of their cassava fields to a total of 4 to 5 hectares (about 10 to 12 acres), and to hire more people to help with cultivation and cake making. They have even accompanied RAMA-BC staff to train communities in nearby Nhamatanda and Buzi on how to make cassava cakes. Given the vast potential of cassava for climate change resiliency, food security and income generation, policymakers and development practitioners would do well to invest in the possibilities of this humble, but mighty, root crop.

Cassava Peels: From Want-Not to Waste-Not