Towards a Vibrant, Private-Sector Led Seed Industry in Africa

TASAI’s Theory of Change is illustrated in Figure 1 below. This article focuses on one of these aspects — the private sector — and highlights five findings on the scope and role of the private sector in advancing competitive seed systems in Africa.

TASAI classifies seed companies in Africa into three categories: domestic (operating in one country); regional (operating in multiple African countries); and multinational (headquartered outside of Africa). For the focus crops under TASAI studies (four key cereal and legume crops per country) African-owned companies (Domestic and Regional) account for at least 75% of companies actively producing and marketing certified seeds (See Figure 2).

Figure 2: Ownership of seed companies engaged in the production of key cereal and legume crops

By both volume and value certified maize seed comprises the largest share of the formal seed market in Africa. Given the size of the maize seed market, it is no wonder that most companies — multinational, regional, and domestic included — are actively competing for a share. MNCs hold significant market shares in Kenya, Malawi, South Africa, Tanzania, Zambia, and Zimbabwe.  However, even in these countries, with the exception of Zambia, the combined market share of African-owned companies exceeds that of MNCs. As shown in Figure 3, African-owned companies — most of which are fairly new — control 60-80% of the market. 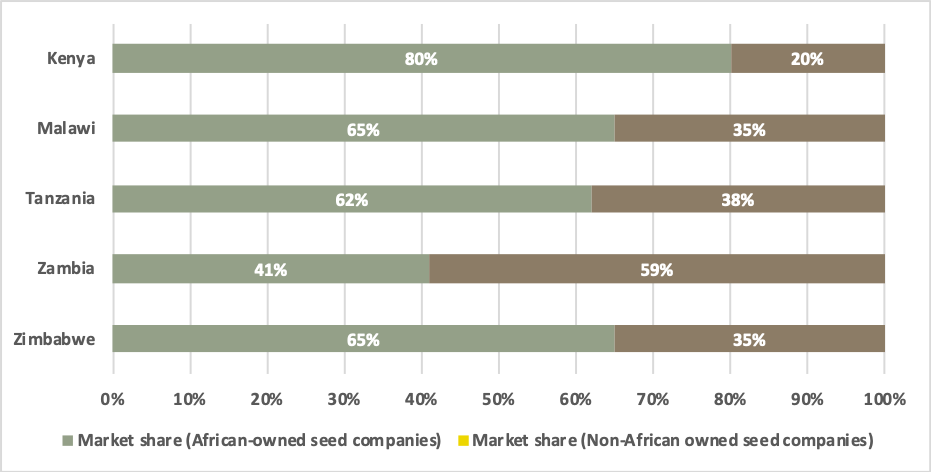 Counterfeit (“fake”) seed is a growing problem in most African countries, threatening the livelihoods of smallholder farmers who unknowingly purchase regular grain labeled as certified seed. Seed companies in the DRC, Madagascar, Malawi, Nigeria, Rwanda, and Zimbabwe have each reported more than 20 cases of fake seed per year. Since most countries do not have a formal system of tracking cases of counterfeit seeds, the reported figures are likely to be a significant underestimation of the problem. In response to this growing problem, several countries have implemented innovative solutions through public-private partnerships. For example, in Kenya and Nigeria, the seed regulatory agencies, in collaboration with the private sector, have launched electronically coded security labels that farmers can use to authenticate certified seed. This initiative is bearing fruit in Kenya; in the most recent TASAI study in Kenya, seed companies reported a 72% satisfaction rating with government efforts to stamp out fake seed — a significant improvement from previous ratings (50% in 2015 and 39% in 2013).

19 out of 21 countries surveyed by TASAI — all but Liberia and Sierra Leone — have a national seed trade association and/or a national seed sector platform. South Africa’s SANSOR is a model of a well-functioning national seed trade association. It provides a wide range of services to the seed industry, and its members rate the association’s performance as excellent. Other national associations such as NASTAG (Ghana), STAK (Kenya), STAM (Malawi), SEEDAN (Nigeria), TASTA (Tanzania), USTA (Uganda), and ZASTA (Zambia) have developed good working relationships with their respective governments to address critical policy, regulatory, and other issues affecting the industry.

Despite some challenges, in the last decade many African countries have made significant progress towards establishing a strong and vibrant private seed sector serving smallholder and commercial farmers. However, the story of formal seed sector development in Africa is nuanced, with significant variation by country, crop, and year. TASAI’s reports capture this detail by tracking 22 indicators in 5 categories (Research and Development, Seed Policy and Regulations, Industry Competitiveness, Institutional Support, and Service to Smallholder Farmers), most of which are crop-specific.

Some best practices learned, key progress made, and further areas for growth from AGRA's time spend working with seeds in Africa.

Profitable employment or self-employment of youth in agriculture and food systems is critical for the reduction of poverty and hunger in many countries.