Segmenting the Ag Finance Market, Part 2: What Can We Learn From Microfinance?

In part 1, I shared the smallholder segmentation pyramid.  In part 2, I’ll explain how It reminds me of a similar one for microfinance institutions (MFIs). Some highlights:

MFIs are divided into different tiers based on their sustainability (return on assets or ROA), size (total assets in U.S. dollars) and transparency (level of regulation and reporting). 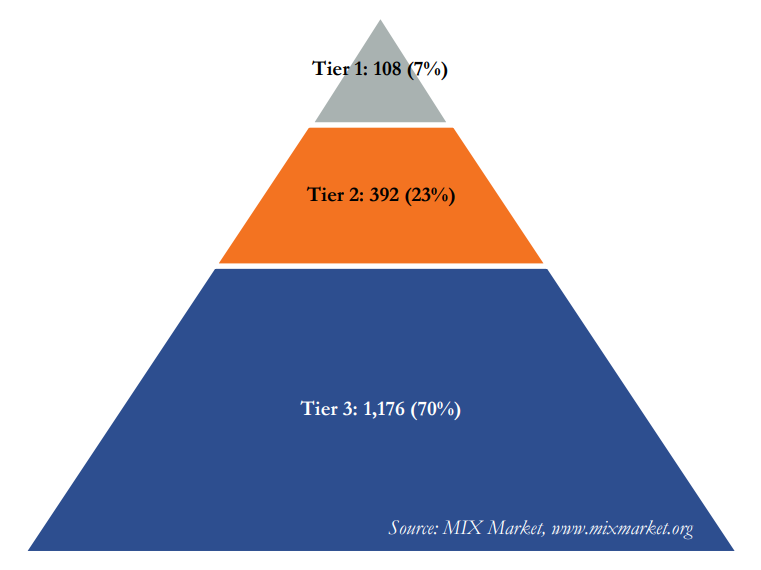 The percentages look surprisingly similar to the smallholder farmer segmentation, with the top segment of both pyramids being 7 percent.  While the figure above uses a sample of 1,676 MFIs, there are an estimated 10,000 MFIs operating globally. Of those 10,000, only around 1,000 are profitable and only half of those, or 500, meet underwriting criteria for investments from microfinance investment vehicles (MIVs), i.e. specialized asset managers focusing on microfinance. Globally, MFIs represent an estimated $124 billion credit portfolio serving 140 million borrowers. Even though microfinance is thought of as a mature market, there are about 700 million people living in extreme poverty meaning only about 20 percent of that market is being served.

This makes me wonder whether we should be focusing more on how to scale the top of the pyramid or going deeper down the pyramid? In microfinance, many of the smaller tier 2 and tier 3 MFIs have stronger development objectives but also depend on grant funding, i.e., are not sustainable only on earned income. For that reason, whenever anyone talks about increasing financing and scaling, they are primarily referring to tier 1 MFIs. What I think sometimes happens is a microfinance fund will have tier 1 MFIs make up 80 percent of their portfolio while the tier 2 and 3 MFIs will make up 80 percent of their impact stories.

Let’s take a look at the U.S. Development Finance Corporation's (DFC) 2020 Annual Report for another example. The DFC made 79 commitments totaling $4.7 billion. Excluding its technical assistance awards, the average deal size was more than $60 million. But things look much different if you break the deals into different-sized buckets. If you do, the average deal size ranges from more than $200 million to less than $20 million, something sometimes described as a barbell approach. 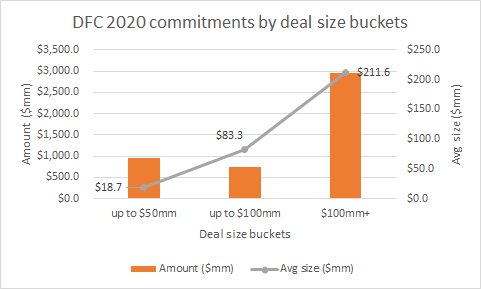 The 23 deals greater than $50 million (the total of the two right bars) make up close to 80 percent of the total. If you look at some of the agriculture investments highlighted you’ll see One Acre Fund and Root Capital. The interesting thing about those two is that while both are very impactful, neither are self-sustainable, meaning it would be hard to fill up a portfolio with them. Don’t get me wrong; I think this is exactly what the DFC should be doing and should even be doing more of. Larger and more commercial deals allow the DFC to do smaller deals such as One Acre Fund, in a way cross-subsidizing deals. I just think it’s important for us to remember that there is often a distinction between deals for impact (which may even need continuous grant support) and deals for volume (i.e. scale).

Filed Under: Markets and Trade

Smallholders farmers often require continuous subsidy and even a small dollar income gain can make a big difference. Should the focus be on increasing productivity or alternative livelihoods?

Many smallholder farmers are not able to access commercial financing; those who do have access are already the easiest to finance. Who should we try to reach?

What work does USAID do in agricultural finance? That is the question we hope start answering during this month on Agrilinks.