The Russia-Ukraine Grain Agreement: What Is at Stake?

This post is written by Joseph Glauber and David Laborde, IFPRI. It originally appeared on the IFPRI site.
On July 22, Ukraine and Russia reached an agreement to allow exports of grain and other agricultural products to resume from selected Ukraine Black Sea ports after months of Russian blockade. The agreement comes at a time when storage capacity is reaching its limits, with much of the 2022 wheat harvest and the approximately 20 million metric tons of grains and oilseeds harvested in 2021 remaining in storage—unable to ship because of the blockade.

The deal, brokered by Turkey and the United Nations, has been widely praised; resuming Ukraine trade should help ease market prices, consolidating the reductions seen in recent weeks and helping to bring them back to the pre-COVID-19 levels of 2020. Indeed, wheat prices had already fallen to their pre-invasion level by July 1, while corn prices returned to pre-war levels by July 17 (Figure 1). Still, prices for both cereals remain 50% higher than 30 months ago.

The agreement could help to alleviate rising food insecurity and global hunger concerns. Hundreds of millions of people in the Middle East and North Africa (MENA) region and elsewhere depend on Black Sea wheat imports as an essential part of their diets and are contending with high prices.

However, there is a great deal of uncertainty surrounding the deal. Less than 24 hours after it was signed, Russian rockets struck port facilities in Odessa, damaging grain loading facilities. Ukraine continues to prepare for the resumption of exports, but the attack has cast doubt on whether insurers will be willing to insure ships operating in the region. Within hours of the attack, futures prices had increased by 5% in reaction. Assuming the deal moves forward amid such risks, what are the likely obstacles and impacts—on global markets, food security in affected countries, and for farmers in Ukraine?

Why is the grain agreement important?

Black Sea ports have been effectively blocked since mid-February, first by Russian military exercises, then by mines placed by Ukraine to prevent possible Russian sea-based attacks after the invasion. Ukraine ships almost 75% of its agricultural exports through the ports on the Black Sea. About half of those exports go out through the ports of Odessa, Chornomorsk, and Pivdennyi (Yuzhny) (Figure 2). 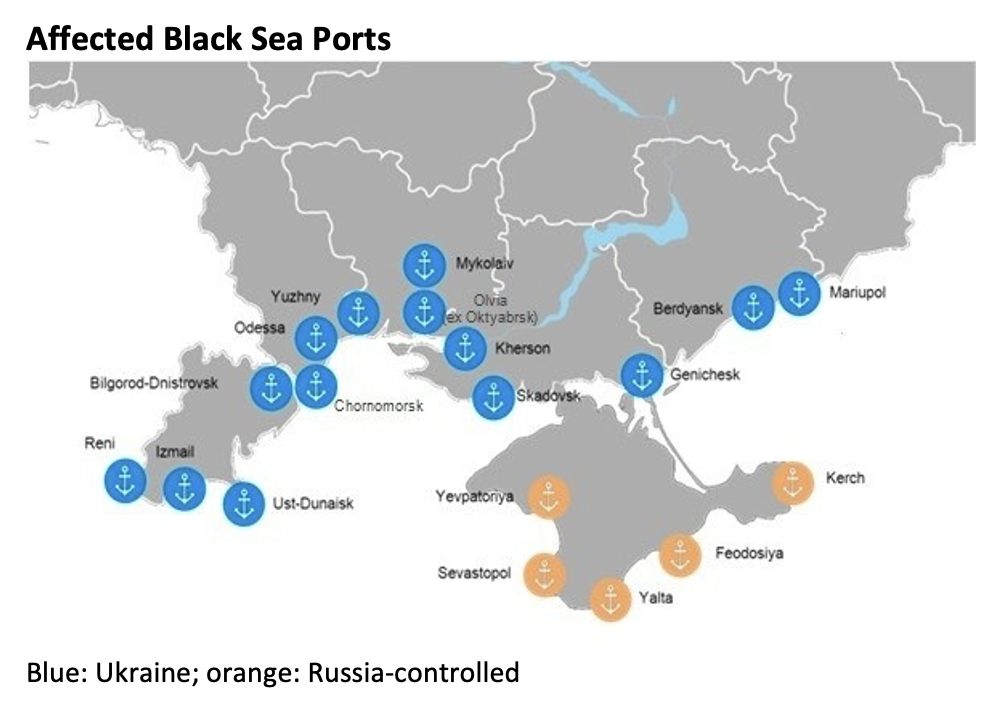 In 2021, Ukraine exported an average 4 million tons of grains (wheat, maize and barley) per month and 430,000 tons of sunflower oil. Shipments over the summer and fall can be particularly heavy, exceeding 6 million tons (Figure 3). 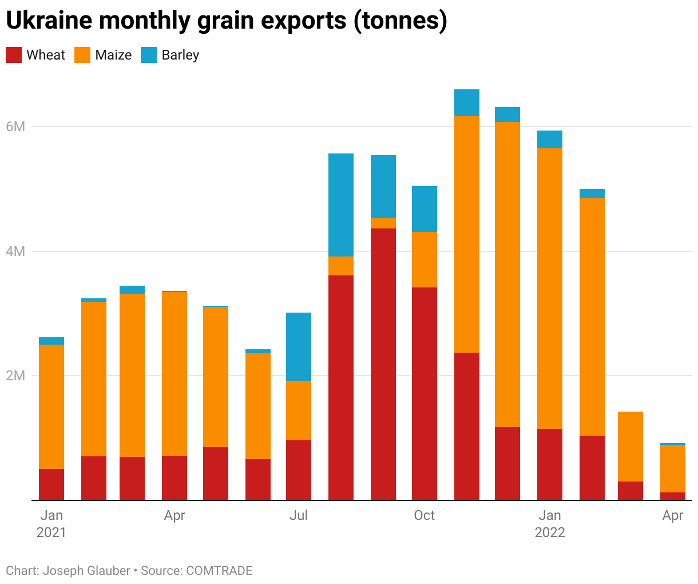 The blockade resulted in a sharp reduction in exports as grain was diverted to alternate routes by rail and barge to Romanian ports on the Black Sea or through Poland to the Baltic Sea. Despite those efforts, exports have averaged about only 1.5-2 million tons monthly, about one third the normal level. As a result, about 20 million tons of grain from 2021, including 6 million tons of wheat (13% of 2021 harvest), still has not shipped, causing severe stress on available storage capacity outside of conflict areas, estimated at roughly 24 million tons in early May.

With a 19.5 million ton wheat harvest expected this summer and an additional 38.2 million tons of feed grains expected to be harvested in the fall, analysis suggests storage capacity will be exhausted by late summer (before the harvest of spring-planted crops) forcing the use of temporary storage bags, keeping unharvested crops in the fields, or storing part of the harvest on the ground. Temporary storage could lead to large quality losses in the grain, while the ongoing war threatens further damage to grain transport and storage within the country.

Another issue is the additional costs incurred by exporting from Baltic Sea ports via Poland or through Romanian Black Sea ports. Analysts suggest this may add $100 per ton or more to the cost of Ukraine grain. In a competitive global market, those costs must be largely borne by already beleaguered Ukraine producers. Without access to export markets at sufficient market prices, Ukraine farmers would have limited incentives to plant in the fall and next spring—thus prolonging the global grain shortage into 2023.

What is in the agreement?

The deal to resume Black Sea exports involves two separate agreements: One between Ukraine and Turkey covering grain exports from Ukraine, and one between Russia and Turkey covering food and fertilizer exports from Russia. Under the Ukraine agreement, safe passage of export ships would be allowed from the ports of Odessa, Chornomorsk, and Pivdennyi. Significantly, the agreement does not extend to the port of Mykolaiv, which accounts for about one fifth of annual Black Sea exports, but is closer to combat zones within Ukraine. Under its agreement with Turkey, Russia gets assurances that its exports of food and fertilizer will not be affected by export sanctions. This latter point is important, as Russia, like Ukraine is also a major exporter of agricultural products and fertilizers. The agreement does not extend to natural gas which is an important feedstock for nitrogenous fertilizers. Finally, the agreement lasts for 120 days but could be extended if agreed to by Russia and Ukraine.

What are the likely effects?

Given that markets remain tense and global grain stocks remain at historically low levels, reconnecting Ukraine to global and regional markets should help—but two questions remain. First, can the agreement be implemented and delivered at scale, allowing exports to return to pre-war levels of 4-5 million tons per month? Reaching such a target will require instituting protocols to guide ships and inspect them, and also convincing commercial operators to reduce shipping rates and currently high insurance premiums. In this context, the July 23 missile attack on Odessa has sent a very negative message.

The primary beneficiaries of the agreement will be Ukrainian farmers. Many are now facing bankruptcy due to very adverse conditions from the ongoing war, the lack of inputs (fuel and fertilizers), and extremely low prices for their crops. Restoring major access to export markets at sufficient market prices (and without the additional costs of shipping overland through Poland or Romania) is essential for their immediate economic survival, and to provide incentives to plant in the fall and next spring—to avoid prolonging the global grain shortage into 2023.

Second, consumers of Ukrainian grains (Figure 4) including food products (wheat) and feed (corn, barley but also wheat in some markets) also stand to benefit from the deal. These include MENA countries such as Egypt that import to meet the majority of their wheat and feed grain needs— and account for half of the Ukrainian wheat exports—as well as distant countries like China, which rely on Ukrainian corn, among other products, for livestock feed. Among the MENA countries, Turkey is an important processing center for Black Sea grains, and its food processing industries will also benefit from the normalization of trade. Among the poorest countries and more food insecure, meanwhile, the deal could have two principal effects: Assuming that World Food Program food assistance exports will receive top priority, it could deliver much-needed relief to the 20 hunger hotspots identified by FAO and WFP. And if the agreement leads to lower prices on global markets, it could address the affordability challenge faced by most low-income countries today.

Third, Russia will also benefit from safer shipping operations in the Black Sea, a reduction of trade costs that impact its own exports, and potential easing of the indirect effects of sanctions on its exports of food and fertilizer products.

Despite its shaky start, many hope the Russia-Ukraine agreement will result in increased exports of agricultural and fertilizer products. This will help mitigate some of the impacts of the war on the world’s poorest households. Is it enough to restore the pre-war status quo? No. The current crisis in supplies of wheat and other agricultural products is driven by many factors and there is a need to rebuild global inventories. This rebuilding process would be greatly accelerated if Ukraine manages to recover its role on global market. Yet the war is ongoing, with continuing adverse impacts on production and daily uncertainty—a single errant rocket could cause insurers to balk at providing insurance.

In the short run, implementing the agreement at scale and for the rest of year is essential to avoid storage issues that could ultimately drive both prices and production down in Ukraine. The deal is tenuous; nevertheless, it remains the beacon of hope as the first step towards a normalization of trade out of the Black Sea region, and improved food security for hundreds of millions.

Joseph Glauber and David Laborde are Senior Research Fellows with IFPRI's Markets, Trade, and Institutions Division. Opinions are those of the authors.

How the War in Ukraine Threatens Bangladesh’s Food Security