Poetry, Improv and a Lost Crop of the Incas: Telling Stories to Save the World

Jan Kreuze stood in front of a room full of reporters and began shredding paper.

“This is how a plant attacks a virus,” the researcher explained.

Then he bent over and gathered up the pieces. Reassembling them with a computer program is an easier, cheaper way of getting a picture of the disease than sifting through the genetics of an entire plant, he said. And that could lead to better strategies for fighting it.

Wilmer Perez held a cardboard wheel above his head. “It doesn’t need batteries or the internet,” he told the group. And yet the device helps farmers decide when to apply pesticides, dramatically reducing their use.

Another scientist, David Ramirez, asked the reporters, “Did you know plants have memory?”

I didn’t and was astounded to learn that they have both short- and long-term memories. Understanding how they work could help subsequent generations of plants better survive drought and other stresses.

The three researchers were among about two dozen scientists taking turns in an exercise that I contrived at the International Potato Center in Lima, Peru.  Rather than face real reporters, they met colleagues who took on the role of the press and delighted in tormenting each other with inane questions such as, “Do all potatoes have genes?”

Hugo Campos, the organization’s director of research, invited me to the Lima workshop and another one with an equal number of researchers in Kigali, Rwanda. The International Potato Center — known by the acronym CIP — researches and develops root and tuber farming to improve nutrition in the developing world.

In 2016, CIP researchers shared the World Food Prize for improving nutrition by advancing the use of biofortified sweet potatoes. That’s a big deal. And Campos is convinced that telling the stories of research and development challenges and solutions is essential for building support to do even more. His goal: “Change the world.”

I met Campos when he visited agriculture researchers at Michigan State University. I almost didn’t take that meeting, as I wasn’t sure where I fit into that scenario. But I was surprised when he introduced himself. Campos talked not about his technical research but about creating narratives that explained it.

As the senior associate director of MSU’s Knight Center for Environmental Journalism, telling research and science stories is square in my wheelhouse. We chatted, and a few weeks later, Campos invited me to meet with CIP scientists and economists.

Joining me in the workshops spanning two weeks and two continents was Catherine Scott, a grant-writing consultant and former director of foundation relations for Heifer International, a non-government development group. 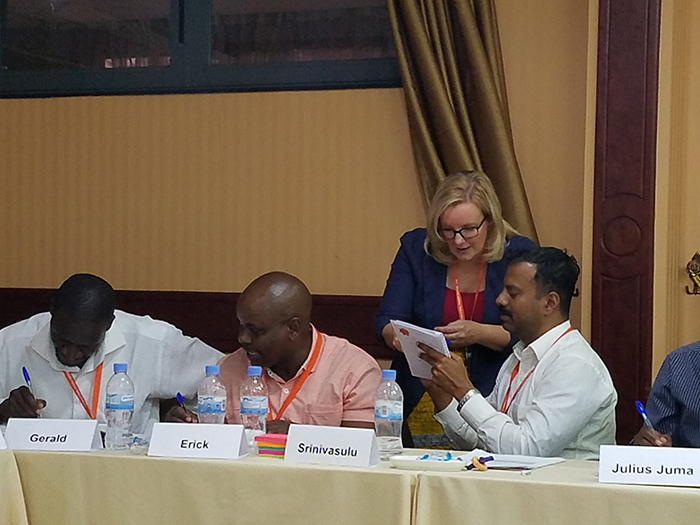 With a doctorate in English literature, Scott has a great appreciation for the storytelling skills required by grant applications and for the reports that keep funders apprised of progress. Such reports are key to maintaining relationships that could lead to another round of funding, she said.

I’m often asked to speak to scientists and researchers about communications, and I have some standard strategies to help them out. Among them: the excellent message box developed by COMPASS Science Communication, Inc. It helps organize your thoughts prior to writing and you can use it to prepare for an interview or develop a presentation.

This trip I also tried some new ideas I picked up after attending a workshop by the Alan Alda Center for Communicating Science. The group out of Stony Brook University on Long Island, New York uses improvisation techniques often taught in acting schools to lower barriers between performer and audience. The idea is to help scientists develop deep empathy with the audience and to become highly responsive to its members.

Alda, the star of the popular television series M*A*S*H and the West Wing, is a former host of the PBS television show Scientific American Frontiers. He has a new book that explains the concept, “If I understood you, would I have this look on my face?” 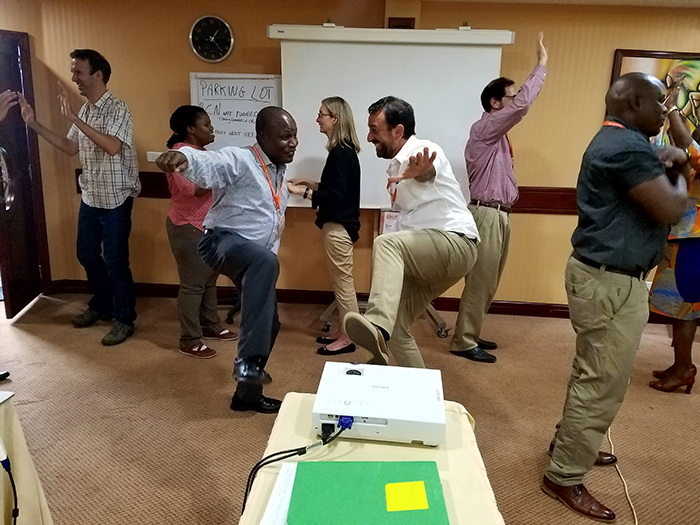 Drama isn’t my thing. So, I was a little nervous about pushing into that territory. But I was surprised at not only how effective these techniques are in getting researchers to think about their audience, but how willing they are to give them a try.

And I also pushed a concept that until now I only noodled around. It’s to use the discipline of haiku to help discover the essential focus of a research story. It gives you the central idea from which to develop a story. I wrote about the idea after reading how a scientist interpreted a report by the Intergovernmental Panel on Climate Change in both water colors and haiku.

This was my chance to put my idea into action. Again, I was uncertain. I’m as much of a poet as I am an actor. But the scientists didn’t disappoint.

They didn’t always follow the rules of haiku, but the poetry assignment struck home. Examples:

What a disaster for the poor!

Coded in the DNA

Late blight disease, until when?

Millions of malnourished children have no time to wait

Agriculture and health need to work hand in hand

We need to be capable and faster at working together

Such efforts and the entire CIP experience reinforced what I’ve long observed: scientists are far more interesting than they realize. And while I typically work with journalists to help them tease out those stories, the researchers certainly can develop the ability to tell them.

Not that there wasn’t pushback. As usual, one of the greatest challenges is convincing detail-oriented scientists that writing requires the discipline to decide what not to report. A story — even a progress report — is not a data dump.

Yet some insist that progress should be reported with tables and tables of data. I disagree: Find a few key numbers and stick to the story.

My compromise? Tell the story. Stick the data tables into the appendix. No one will read them there, but at least you’ll feel better about it.

Sometimes it is a matter of framing. Wolfgang Gruneberg in Lima was incredulous that I hadn’t heard of the yam bean, an important plant that he studies.

“It’s one of the lost crops of the Incas,” he said in exasperation.

The greater point is to ask what a funder would rather underwrite: yam bean research or recovering a lost crop of the Incas, a crop that once fed thousands and could do so again?

A research story should be engaging, even exciting.

And told stories. Heck, we even danced.

This story was produced with the help of USAID. For more information check out The Knight Center for Environmental Journalism's blog.

Learn how one team is working to building communications capacity among researchers and reporters to disseminate important agricultural research.

‘Switching’ onto ICT Approaches to Gender in Extension Services

Duncan Sones, of the Africa Soil Health Consortium (ASHC) delivery team, looks back on six years of concept and project development that could unlock changes in farmer’s ability to effectively...

Being Better Together through Humanitarian Science

We are being better together as information flows through and across overlapping communities of practice, translating data into information, knowledge and actions that safeguard lives and livelihoods.