In Uganda, undernourishment affects 15 percent of the population, a proportion of which has decreased over the last decade. According to the Uganda Nutrition Action Plan 2011-2016, iron-deficiency anaemia affects three-quarters of children under five years old and half of women of reproductive age. Zinc (ZN) deficiencies range from 20-70 percent in young children and 20-30 percent in adults.

Zinc deficiency results in poor growth and reduced resistance to infectious diseases. Iron and zinc are key to the health and diets of women and children; and consumption of foods rich in micronutrients like zinc and iron can enhance human health.

The higher iron and zinc rich beans called NAROBEAN 1, 2, 3, 4C and 5C can significantly improve nutrition and are particularly beneficial for children and expectant mothers. The narobeans also possess special attributes — they have good grain texture, they are tasty, and they have a short cooking time. They can also be consumed in various forms, either as whole cooked grain, soup, or leaf vegetables. In addition, the beans can be used to develop new products such as confectioneries and porridge flour.

The birth of Mr. Nutri Bean

Mr. Nutribean is a giant, fun anthropomorphic bean who tells children about the health benefits of beans, including the importance of including iron and zinc as part of a balanced diet. He promotes the Nutri Bean varieties, sharing the advantages of choosing the fortified beans. 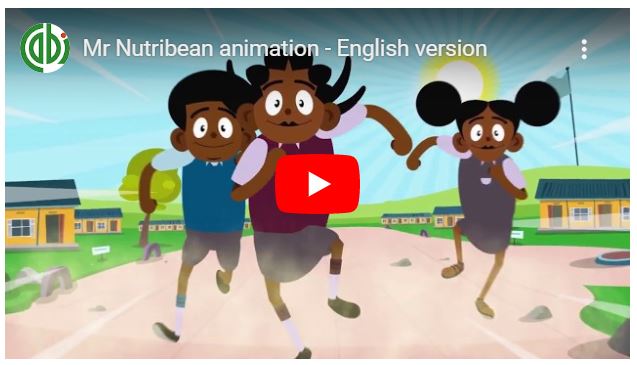 It is envisaged that children would take this information from their school studies and share it at home with their families. Parents would then seek out the beans and seed for production, and both demand and consumption for the iron and zinc rich beans would be realized, thereby achieving the intended objective of improved health.

As the main brand of the iron and zinc rich beans campaign, Mr. Nutribean is featured in an animation cartoon, story chart set, mini booklet, and poster — all of which are available to school children, extension workers, and other community members to use as a discussion point and to share the importance of nutribeans with their audiences.

These materials are interactive with colorful illustrations designed to make learning about the beans a fun experience for younger audiences. The animation, which has been made for children in both rural and urban areas, is available in English and five local languages (Luganda, Lunyakitara, Akarimonjong, Luo and Lugbara), and it has already been shown to school children at two separate schools during pre-test. Mr. Nutribean is also available as a costume! It brings the character to life and can be worn by adults when visiting schools or communities to reinforce messages about the beans.

While the ASHC project has now come to an end, it is planned that communication outputs featuring the Mr. Nutribean brand will remain in use by NARO in ongoing farmer trainings and outreach programs. Organizations that promote nutritious foods such as HarvestPlus hope to use communication materials from the Mr. Nutribean brand, especially the animation to promote bio-fortified food.

This work contributes to the goal of addressing Uganda’s nutritional deficiencies and by continuing to present the nutribeans and their benefits directly to children. NARO and the CABI ASHC team are hoping to inspire a new crop of health-conscious youth and their families.