A new map launched by members of the Livestock Data for Decisions community sheds light on the important role that livestock play in building climate resilience for rural communities. The map features 20 innovations crowdsourced from organizations working around the world to improve the lives of livestock-keepers and their animals. Innovations include drought-tolerant breeds, better feeds, and data-driven advisory tools for farmers.

Launched ahead of the COP26 U.N. climate talks, these examples offer valuable evidence for policymakers to address the role that livestock play in climate adaptation, rural development, and global food security.

Local innovations hold great potential for building climate resilience through livestock, as they are in tune with local conditions, and the needs and challenges of communities under pressure. 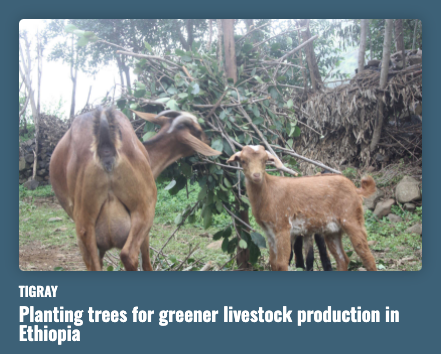 The Ficus thonningii silvopastoral systems adopted by Ethiopian farmers are a prime example of a local innovation in livestock management contributing to heightened resilience toward the pressures of climate change.

The systems were originally adopted during the droughts and famines in 1980s Ethiopia. Researchers from Mekelle University have found that the practice has now been adopted by more than 20,000 households across northern Ethiopia as of August 2017.

This practice has also reduced the water use of livestock by up to 83% while providing more biomass for grazing animals to feed. Researchers now plan to expand these efforts across Ethiopia and the surrounding region.

Likewise, in response to the threat of increased water scarcity and security as a result of climate change, pastoral communities in some of the driest regions of the world are turning to their livestock as a key platform from which to build resilience for the future. 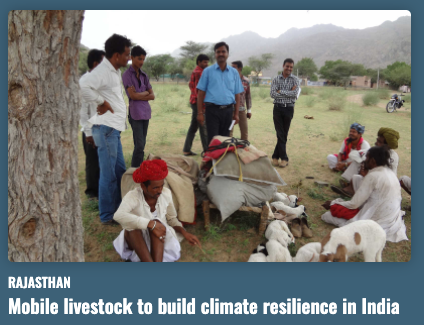 In Rajasthan, India, researchers from the International Center for Agricultural Research in Dry Areas found that the mobile livestock practices adopted by pastoralists in the region helped build the resilience of their communities to the growing pressures of climate change while helping them to maintain livestock as a profitable and nutritious resource.

By migrating their animals, researchers found that Rajasthani livestock-keepers contributed to less environmental degradation compared to keepers of sedentary livestock. The Rajasthani livestock-keepers also were able to keep their livestock healthy and productive, even during periods of scarcity and insecurity. Adopting these mobile livestock practices allowed these keepers a flexibility that is well-suited to the unpredictable nature of climate change’s impact, building resilience while reducing the footprint of livestock on the natural environment. 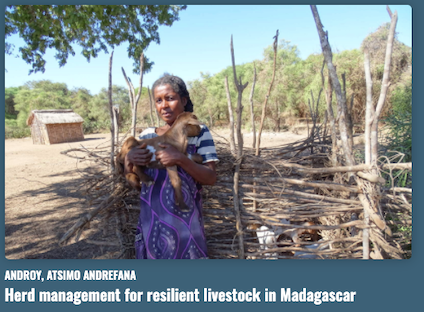 In response to these rising health challenges due to climate change, researchers from Land O’Lakes Venture37 set out to improve livestock health in southern Madagascar so that these animals can remain a valuable and resilient resource for smallholder farmers even after the impact of climate change has been realized.

Livestock-owning households in southern Madagascar suffer mortality losses worth $8 million every year, which will rise as livestock face additional health challenges due to climate change.

By undertaking vaccination programs and parasite control, researchers from Land O’Lakes were able to reduce mortality losses to vulnerable livestock-owning households from 18% to 10%, keeping livestock healthy and building their resilience in the face of growing climatic challenges.

Unlike many plant crops, livestock can remain resilient and productive during more extreme weather. Researchers from International Center for Agricultural Research in Dry Areas found that feeding cactus pears to livestock in combination with other local products, allowed these animals to continue receiving energy and vitamin-rich fodder during feed- and water-scarce periods. Through promotion of their good health through new ways of feeding, livestock can remain a productive and resilient resource for the communities who need them most.

As the world faces the rising impact of climate change, data-driven and scientific solutions will enable livestock to build and scale up resilience for communities across low- and middle-income countries.

Researchers from the Centre for Tropical Livestock Genetics and Health are leading the way in discovering how the resilience of livestock can be built upon to further rise to the challenge of climate change.

For instance, researchers have found that the genes of indigenous Ethiopian chickens are adapted to local agroclimatic conditions, including extreme temperature, rainfall, water and low food availability. The researchers believe they could harness this adaptability and, through breeding programs, develop more climate- resilient and highly productive village poultry.

Likewise, Centre for Tropical Livestock Genetics and Health scientists are also studying how genome editing could make use of a particular gene in European cows that promotes better thermoregulation. By editing the ‘SLICK’ gene displayed by European cows into African cattle, these livestock would become more resilient and more productive for their keepers under the harsher conditions brought about by a changing global climate.

Data-driven solutions are also at the forefront of ensuring livestock remain resilient against these rising challenges. The Regional Drought Monitoring and Outlook System for South Asia, launched by the International Centre for Integrated Mountain Development, is a game-changer for livestock-keepers across the region.

By providing reliable and almost real-time drought indicators, the monitoring and outlook system provides farmers with a valuable tool to prepare for outbreaks of drought, informing them of when to take the necessary steps to protect their livestock.

These stories highlight the vast potential for promoting the climate resilience that exists in livestock around the world.

These groups, whether they are adopting livestock innovations on a local, village-level scale, or developing new solutions in labs and long-term case studies, are building resilience against the impact of climate change, with great potential to be further scaled up on the ground.

This project offers valuable evidence for policymakers to address the role that livestock play in climate adaptation, rural development, and global food security.

The Livestock and Climate Resilience map is a joint production of the Centre for Supporting Evidence-Based Interventions in Livestock, the Centre for Tropical Livestock Genetics and Health, the Global Academy of Agriculture and Food Security (all at the University of Edinburgh), and the International Livestock Research Institute. These organizations are members of the Livestock Data for Decisions Community of Practice.

Capitalizing on Digital Tools to Sustain Bean Production, Trade and Consumption Amidst COVID-19

We gather lessons on how the deployment of some digital tools to aid interactions in mitigating the COVID-19 crisis.

Bee Pollination, Improving Biodiversity and the Livelihood of Communities across Tigray

REST/USAID contribution through beekeeping The Tigray Regional State, specifically the Eastern part of the region, is well-known for the production of high quality honey in Ethiopia. This is largely due...