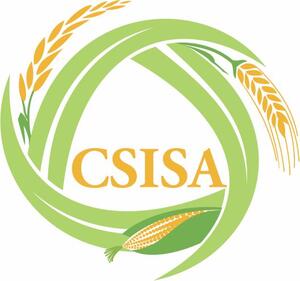 According to Narayan Khanal, a researcher who works with the Cereal Systems Initiatives for South Asia (CSISA), growing evidence indicates mung beans planted between rice and wheat rotations improves soil fertility and rice productivity by as much as 25 percent.

Rice-wheat rotation is the dominant cropping pattern in many regions of Nepal. With wheat harvest in March followed by rice transplanting in July, a substantial amount of land remains fallow for about 90 to 100 days. Since 2014, CSISA researchers have worked to fill the gap by bringing value chain actors together to promote the use of disease-tolerant and high-yielding mung bean varieties, conservation agriculture techniques, and agricultural mechanization such as direct seeders.

“Over the years, our research has included market mapping with value chain actors, testing mung bean varieties in the private sector by engaging seed companies and millers, and building the capacity of farmers to grow demand,” says Khanal. “The legume provides a cash crop for farmers with its stable, high market price and demand across Asia.”

Khanal also adds that the long-term results show mung bean crop residue provides fodder to feed live-stock and improve soil fertility as it is incorporated into the field to be used as fertilizer as part of conservation agriculture practices.

Farmers benefit in the field but also in human health

The Bishwash farmer cooperative from Jhalari, Kanchanpur in the South-Far-Western Nepal have been part of the mung bean trials for four years. In this time, the collective of 150 farmers has increased the land used for mung bean cultivation from 0.2 hectares to over 100 hectares.

By the 2019 spring season, around 70 percent of cropped land was covered by mung beans in the fallow season as farmers became aware of the benefits, according to Kamala Bhat, the Manager of Bishwash Cooperative.

“Farmers involved in mung bean production are consuming over half of their produce at home before selling the rest at market for a decent price,” she says.

Khagendra Sharma––a spokesperson from of the Ministry of Land Management Agriculture and Cooperative (MoLMAC), Sudurpaschim Province, Nepal––explains that with the increase in consumption of mung beans brings added nutrition to diets.

“There was a local perception that eating mung beans was just for sick people; but with the increase of farming the lentil, people now consume it in different dishes,” he says.

Mung beans are commonly used in cuisines across Asia as an ingredient for both savory and sweet dishes. They provide a good source of protein and dietary fibre. Whole cooked mung beans are usually prepared from dried beans by boiling until soft.

In a group discussion as part of the CSISA study, women farmers attributed mung bean crops to their economic empowerment and also social empowerment as they predominantly take the lead engaging in its production and marketing. Women reported to believe mung bean production has been a boon contribution to their livelihoods in a usually idle time.

After participating in the mung bean field visit organized by the CSISA project, Narayan Gnawali, the owner of Poshan Food Product (PFP) in Butawal, started purchasing mung bean from the project area in contractual arrangement with farmers.

According to Khanal, seeing the benefit from mung bean cultivation and increased farmers’ demand, the MoLMAC invested $200 thousand to support farmers in irrigation, seed, and plant protection support in technical support of CSISA in 2019. The total 350 hectares under mung bean cultivation involved 1200 farmers in Kailali and Kanchanpur districts.

Khanal says CSISA is planning to provide technical support to the ministry and millers for the expansion of mung bean in larger areas in the months to come.