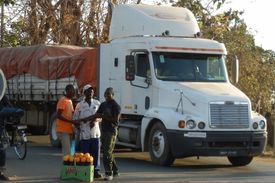 It’s March. The rainy season is still underway, and the heat can be excruciating, but life goes on just like any other day along to the border between Malawi and Mozambique in a town called Lizulu. Here you might not understand each other, but you certainly will understand trade language: bargaining every kwacha; tampering scales so you can get the most for your money; and getting pushed away with your bags and a kid in your back. This could be a perfect example of what happens when you have free trade. The difference is that this is not free; it has a high cost — informality. What’s so wrong with informal cross-border trade (ICBT)? It’s been well documented that ICBT benefits small-scale traders, particularly women who in Africa represent more than 70 percent of informal traders. This trade represents their livelihoods and a way to feed their families and send their children to school. However, it has also been extensively documented that, while in the short run, ICBT does provide benefits to many, these benefits are not always sustainable and can limit economic and income opportunities found in formalized trade. Further, a woman is more likely to suffer sexual harassment and bribes along the trade route when she does not have the knowledge or documentation of legitimate fees and who is owed.

Although cases in favor of formalization are plenty, the issue remains of how to implement measures to formalize trade. But why push for “formal” trade when it does not benefit all? Because traders and governments stand to benefit from it. Formal trade helps build robust economies [1] with taxes, countries build more infrastructure to support trade and to make goods, particularly food, that are available to all. Traders could benefit [2] from a secure operating environment that would elp them trade more and increase their earnings.  In Southern Africa, the Common Market for Eastern and Southern Africa (COMESA) has tried to implement a Simplified Trade Regime (STR). [3] This system uses little paperwork and reduced fee, but still requires people to clear their goods, meaning going through a tedious process of declaring what goods you have to trade. The World Bank implemented a pilot Charter for Cross-Border Traders in Mwami/Mchinji border [4] (Zambia-Malawi border) to offer more transparent transactions and increase awareness among traders. It has been well received and points to a solution that involves convincing traders and officials of the benefits of formal trade. Clearly, the implementation has not been easy, though the benefits are many, particularly for small-scale traders.

Pushing for more formal trade is critical if we want to promote inclusive economic growth. As we mentioned above, in Africa alone, hundreds of thousands of women cross borders every day to deliver goods from areas where they are relatively cheap to areas in which they are in shorter supply. Their contribution to trade is much less than it could be because of various specific nontariff barriers that adversely impact the trade activities of women and women-owned enterprises. These barriers often lead women traders into the informal economy where lack of access to finance, market and trade information, and networks reduces their capacity to grow and develop their business. Policymakers often overlook women’s contribution to trade and the unique challenges they face. According to the World Bank [5], this neglect reflects, in part, a lack of data and information on the unique contributions of, and challenges on, women and trade in Africa and also the underrepresentation of women in trade policy discussions.

Formalization offers an opportunity to protect all traders, but this “protection” is something they are not familiar with. For traders sitting along the road in Lizulu, everyday unscrupulous people come to request payments to trade. Who do they pay and for what? Usually they pay a powerful trader for a space to sell their products. Most people do not know who this person is, why he runs the market, and when and how they were assigned the space they received. This lack of clarity about the rulers and the rules makes the business risky. In most cases, women and young traders struggle the most, but when trade is formalized, small-scale traders, many of them women, are connected to formal market channels that improve livelihoods, which in turn raise social status, provide greater empowerment and increase their control over relevant resources. [6]

Building capacity among traders to understand their rights and responsibilities is crucial for a system like this to work. The Global Food Security Strategy technical guidance on advancing gender equality [7] and female empowerment provides key concepts, best practices and design principles that can be used for trade programs that are both effective and gender-sensitive/transformative. However, capacity building alone is not enough unless formal trade is transparent. The unpredictability of government policy and procedure significantly hampers investment. In a regional study conducted in several Asian countries, The USAID-Enabling Agricultural Trade [8] project found that uncertainty due to institutional capacity constraints and corruption, in some cases mattered more to traders than high costs or restrictive policies. Out of all the delays and costs associated with cross-border trade, traders most commonly cited lack of clear government policy and procedure as one of the most difficult hurdles to business.

Finally, trade can only be successful when there is a regional approach, meaning when governments agree to implement measures that will support formalization. Enabling environment reforms aim to level the playing field such that burdensome or inefficient government regulations create opportunities for all to invest. Multilateral and regional agreements play key roles, including the World Trade Organization (WTO) agreements on agriculture, sanitary and phytosanitary (SPS) standards; technical barriers to trade (TBT); and the Trade Facilitation Agreement, which commits member countries to a comprehensive set of institutional and border reforms that could reduce worldwide trade costs by almost 20. [9] Unless, Malawi and Mozambique agreed to harmonize their trade policies in such a way that addresses their unregulated borders, measures cannot create marketplaces for traders to offer their products, for consumers to have assurance that they will not be cheated when they purchase at the market, and for governments to generate revenues to reinvest in their economies.

[4] Soprano, Carmine. A Step Toward Formalization: The Charter for Cross-Border Traders http://blogs.worldbank.org/trade/step-toward-formalization-charter-cross-border-traders

[6] ReSAKSS.Assessing the participation of men and women in cross-border trade in agriculture: Evidence from selected East African countries, http://www.resakss.org/node/6438

Get to know Lourdes and Emily

Lourdes Martinez Romero is an agricultural economist in USAID’s Bureau for Food Security, office of Market and Partnership Innovations. Lourdes provides technical support to the Inclusive Market Development division, and works on topics related to market access, private sector engagement and trade facilitation. She enjoys visiting local markets to experience the challenges faced by small-scale traders and the opportunities of cross-border trade to lift people out of extreme poverty.