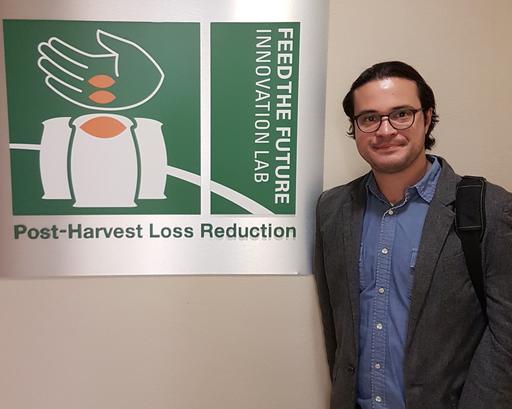 Guatemalans are exposed to constant threats such as the recurrence of droughts and climate variability. Especially over the past seven years, more than 200,000 families of subsistence farmers have been directly affected, having to cope with their crop and labor losses and resulting in seasonal hunger and malnutrition. Due to the intense decrease of food availability, as well as the provision of safe food, the improvement of the availability and safety of grains and storage products for human consumption is key to contributing to the satisfaction of their nutritional needs and their future. The Feed the Future Post-Harvest Loss Innovation Lab (PHLIL) plays a catalyzer role in promoting the creation of peer networks to enhance and give added value to knowledge, achieving innovation that contributes to food security for vulnerable lives. The PHLIL is coordinated and led by Kansas State University partnering with Guatemalan nonprofit SHARE and the University of Nebraska-Lincoln focusing on the country’s staple food: maize.

In this journey to self-reliance for farmers, the recovery from losses suffered due to factors such as lower agricultural productivity were studied through research initiatives in specific livelihood zones of the country: the western highlands and lowlands. We worked closely with farmers varying in size from the subsistence level through the bigger size producers. The Guatemala team focused on local territorial capacities and considered different cultural and gender factors of accepted post-harvest practices and technologies for maize production. This research was later transferred into trainings and capacity building for more than 1,300 farmers and extension agents from civil society organizations, government, academia and the private sector for over the last 6 years in Guatemala.

The landscape became clearer by means of the extensive research that the initiative achieved. We learned that it is imperative to close the gaps still existing. Those gaps include the traceability of maize seed systems, traditional and culturally relevant analysis in relation to maize, grain market best practices, the establishment of trade agreements between buyers and distributors of maize, as well ensuring the presence of toxins with commercial characteristics for human consumption is reduced and regulated. To achieve this it is important to make efforts to promote post-harvest improvement locally, but also strengthen the governing entities to achieve sustainability and promote results beyond the geographic area raised. In general, the increase in per capita income of participating farmers must be planned in a sustainable and practical way. This can be done through support for local organizations’ governance and systems, knowledge improvement for best agricultural practices, innovative tools and equipment that meets their needs, and access to finance.

Because economic recovery is so closely linked with self-reliance, SHARE in Guatemala supports more than 34000 clients of financial integral services, promoting farmers capacity building, financial literacy and support of education through scholarships for vulnerable children.

A Path to Safer Food: The Post-Harvest Loss Innovation Lab Works to Identify and Mitigate Mycotoxins

Driving Action on Food Safety through Partnership and Collaboration