Tools of agricultural biotechnology include modern breeding techniques, genetic engineering and genome editing. They may offer diverse, science-driven approaches to simultaneously alleviate the accelerating pace of both climate change and global food insecurity, while building on decades of using these products safely. Farmers can adopt an integrated set of tools, including biotech crops, that are climate resilient and can better withstand various stresses, including drought, heat and flooding. In addition, researchers are designing many traits with the goal of reducing greenhouse gas emissions and conserving water and land, while increasing yields (Figure 1). Ultimately, it is not enough to have good products that work. Country regulatory environments that allow these products to come to the market and public acceptance are also essential to our efforts in Feed the Future. 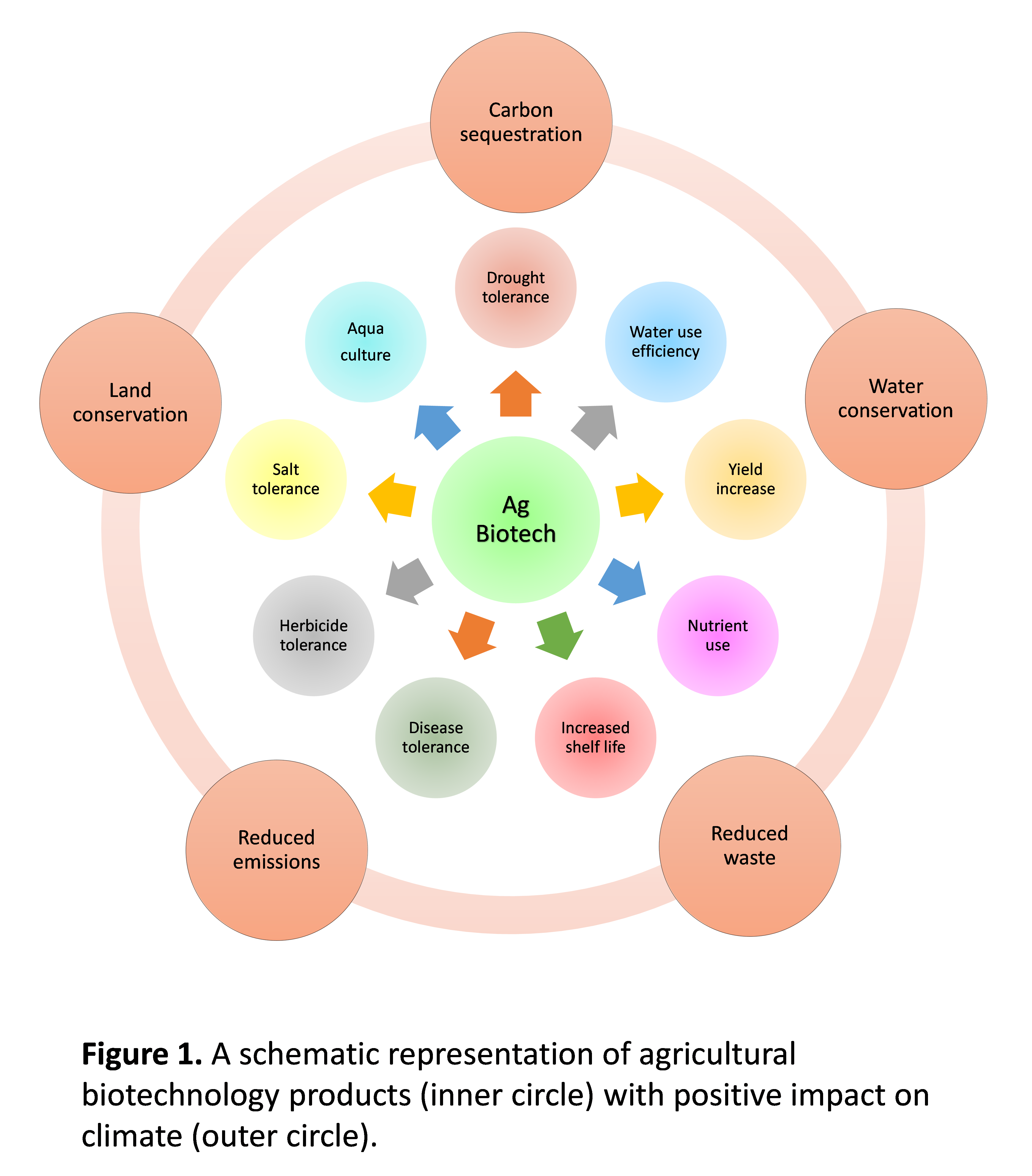 Drought-tolerant crops are a classic example of climate-smart agricultural products. Developers around the globe have introduced drought tolerance traits into wheat, maize, rice, cacao and other crops by manipulating the ability of plants to conserve their water. Specifically, leaf traits such as stomatal conductance, wax production and senescence are altered to achieve drought tolerance. These traits can be coupled with other traits in the same plant to provide multiple benefits. For example, Brazil and Argentina have approved a drought-tolerant wheat that provides not only a 20% higher yield, but also increases carbon sequestration by 7%, even when cultivated in a drought-affected area. These transgenic wheat lines carry an altered version of the transcription factor HaHB4 from sunflowers that resulted in an increase in yield and water-use efficiency across a range of environments. Together with the ability to use water efficiently and increase yield, cultivation of this wheat variety can make better use of agricultural resources and reduce the need to expand arable land and the net carbon footprint.

Genetic alteration to achieve high-yielding crop varieties has been a challenging task. Nevertheless, researchers have been able to successfully develop high-yielding corn, rice and wheat lines, among other crops. One variety of genetically engineered corn under development is more efficient at converting sunlight due to an 8% to 9% increase in leaf size, resulting in a 10% increase in yield, regardless of the growth conditions. Adopting these high-yielding varieties can reduce food insecurity, as well as conserve land and have a positive impact on climate change. Similarly, a genome-edited rice variety produced about 30% larger grains. This is significant because a separate study showed that a 10% increase in rice biomass can reduce methane emissions by more than 10%. Researchers have found that farming contributes to roughly 32% of the total human-caused methane emissions. Therefore, implementing environmentally friendly food production is an important way to mitigate global warming.

At a global level, the negative impact of food waste on the climate is also massive. It is estimated that about 8% of greenhouse gas emissions can be eliminated by preventing food waste. Crops designed for increased shelf life have been around for many years; as scientists learn more about the genetic factors that govern food spoilage, shelf-life and appearance, more products will join those already commercialized. For example, the browning of apples and potatoes does not introduce any food safety or food quality issues, but can lead to food wastage due to appearance alone. Retailers and consumers may discard the food, even though it is as safe and nutritious as when it was first cut. Traits that keep apples, potatoes, tomatoes and mushrooms fresh longer can reduce food wastage and its associated emissions.

According to the Food and Agriculture Organization of the United Nations (FAO), more than three billion people worldwide rely on fish for more than 20% of their annual protein intake, which is resulting in global fish consumption outpacing global fish population growth. Stress on wild fisheries is a topic of concern, and a changing climate negatively affects wild fish stocks. However, genetically engineered, farm-raised salmon, developed to reach their target weight more quickly (they do not grow bigger but gain weight faster) is in inland production in the United States and Canada, and could be produced in other countries as well. Fish with beneficial traits, such as increased muscle mass, are available for consumers in Japan. By leveraging these technological advances, the aquaculture sector could reduce its food and water requirements and lower environmental impacts.

Agricultural biotechnology research is also on the forefront in addressing environmental sustainability in the livestock industry by mitigating its contribution to greenhouse gas emissions and increasing productivity. Livestock that are resilient to drastic changes in climate, such as heat-tolerant angus cattle, could beef up production in warmer climates. Cattle can also be genetically selected for reduced methane emissions, which is another smart and cost-effective way to reach carbon neutrality.

There are a lot of exciting technology developments in the agricultural space, such as biofuels, biopolymers, nutrient-rich food products and disease/insect-tolerant crops that can respond to the effects of a changing climate, all while addressing food insecurity. However, it is not enough to simply have a good product that works. A regulatory environment that allows these products to come to market and public acceptance are also essential. Many efforts are underway across the agricultural sector to communicate the safety, benefits and advantages of including products of agricultural biotechnology as components of the wide array of tools to address climate change. The United States Department of Agriculture (USDA) Foreign Agricultural Service’s New Technologies and Production Methods Division works with other U.S. government agencies and trading partner countries to develop policies that facilitate the global availability of products of agricultural biotechnology.

Policy issues can arise when a country adopts rules and procedures for agricultural biotechnology regulation that are not based on science or the conduct of a sound risk assessment, but instead reflect guidelines that are nontransparent, complicated, expensive or exclusionary. When authorities develop such policies, effective products that have a viable market can be blocked and negatively impact the food value chain. This prevents farmers from being able to employ the full suite of tools that can help them meet their plant and animal production needs while preserving the environment. Through workshops, events, webinars and government-to-government discussions, the New Technologies and Production Methods Division serves on a team to ensure that products of agricultural biotechnology — and farmers around the world who desperately need access to them — are given the opportunity they deserve to make their contribution addressing food security and climate change.

Dr. Aruna Kilaru is an American Association for the Advancement of Science (AAAS) science, technology and policy fellow and science advisor for the USDA Foreign Agricultural Service, New Technologies and Production Methods Division based in Washington, D.C. She is also a distinguished professor of biology at East Tennessee State University with more than 20 years of research experience in plant biology and biotechnology.

Dr. Chris Peterson is the lead science advisor for the USDA Foreign Agricultural Service, New Technologies and Production Methods Division based in Washington, D.C. He has 10 years of experience with policy and technical capacity building around the world. He is trained as an entomologist and conducted pest management research for many years prior to his involvement in international development and policy.

Visit the Activity Page for Food Safety for Food Security

Get Ready to Mitigate